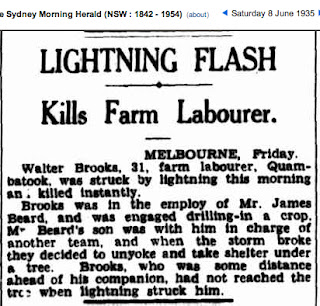 They were two of the twelve children born to Tasmanian convict Thomas BROOKE (c1810 - 1894) and Jane CUNDELL (c1821 - 1904). Thomas and Jane were among the earliest settlers in the Mt Shadwell / Mortlake area in the mid 1840s. All the children lived to adulthood - quite amazing in those times.

Their grandson, Walter was killed by lightening in June 1935, and his father died in the same district in November 1935.

Quambatook is a long way from Mortlake – I wondered why they were both there. 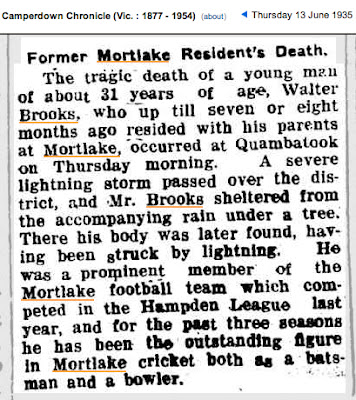 One of Walter’s sisters, Agnes Eliza SUTTIE nee BROOKS (1899 - 1934) died in Mortlake but her son Ronald Wallace SUTTIE had died in Quambatook in 1929.

One of the death notices show that Walter was engaged to a Floss Suttie, possibly the sister of Agnes’ husband Norman Wallace SUTTIE. 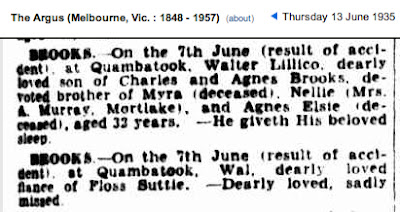 Lawrence Alexander (Alex) HENDERSON (1896-1981), known to us as Uncle Hendy would have loved what Anzac days have become: the march with his mates, the lunch at the pub, telling stories, playing two up and probably a few songs or a bit of music.
Uncle Hendy was a bit of an Aussie larrikin, well a lot of a larrikin really. He was always teasing and joking with us kids, playing the spoons or a gum leaf, and often the fool. He was married to my Auntie Doff, (Dorothy Louise FITTS 1895-1993) my grandfather’s big sister and a gorgeous little lady who outlived all her 7 brothers and sisters and their spouses.
Auntie Doff really loved her Hendy, telling me "don't rush into getting married", that she "got married well into my forties and still had over forty years of wonderful married life". Great advice! Taken!
They didn't have children of their own. They did have us, and quite a few others from Auntie Doffs days on children’s country radio shows as Margot.

Uncle Hendy had signed up for WWI pretty much as soon as he could, enlisting in the Light Horse on Australia Day 1915 at the age of 18. Lucky for us, he got ill (jaundice and appendicitis) and his embarkation for Gallipoli was delayed until June – so many lads did not return.

And of course, in keeping with his larrikinism, his most serious injury during wartime was a broken leg from playing football! There was an inquiry into the accident with quite a number of witnesses.
Uncle Hendy had claimed:
I was playing football on the afternoon of 10/10/17 in a match between 3rd Signal Troop and Brigade Scouts. I was bending down to pick up the ball and came into collision with one of the Scouts, he stood on my leg and broke it.
There were four witnesses in all, each with varying stories as to how close other players were to him and what he was doing at the time of the break.
Witness 1: There was a man within two or three yards of him.
Witness 2: Two players were within three to four yards of him
Witness 3: There was a man within two yards of him
Witness 4: He took the ball and turned as if to run with it…broke his leg while turning.
In the summing up, it was ruled: the injury was purely accidental and no blame attachable to anybody.
Seems like a lot of fuss and protocol for a few lads letting off steam in a football match.

In October 1918, he applied for leave to go to Australia for three weeks for “family reasons” and because “I have not previously had long leave”. It was recommended but he had to sign two statements:
I certify that in the event of my furlough being granted I will not apply for an extension of leave.
and,
In the event of this application being referred to Defence Melbourne I will pay the cost of cabling both ways.
These days, it seems a bit steep to ask these things as by this time, he had been overseas for more than three years, and signed up for almost four – such a long time without a long break.

When he returned from the war (in Jan 1919), he worked in the Merino-Henty area of Victoria as a station hand. It looks like he married and his wife died in 1942. He then married Auntie Doff in Dec 1943 in Ballarat. When I knew them, they lived in Main Ridge on Victoria's Mornington Peninsula, then in Rosebud.
Posted by Jackie van Bergen at 14:05 No comments:

Uncle Ricky was my grandfather’s eldest brother. I have written a little about him before, here and
and in this one about his family. 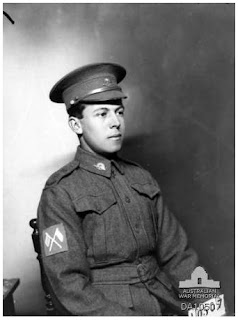 Frederic Ernest Terry Fitts enlisted as a Signaller on 14 July 1915, a few months short of his 22nd birthday. He had been apprenticed as a bookbinder and the printing company had to write a letter releasing him from his apprenticeship agreement.
His service number was 28 and he joined the 29th Battalion, embarking on the Ascanius on 10 November 1915.

He was commended and decorated, being mentioned in Sir Douglas Haig’s despatches for Distinguished and Gallant Services, was awarded a Military Medal, and here is his recommendation for the Distinguished Conduct Medal:
On the night 7/8th May 1918, North of SAILLY-le-SEC, during an attack by this Battalion in conjunction with the Battalion on our left, all telephonic communication between attacking Coys. and Battalion H’qrs was severed by a heavy enemy barrage.  The position was obscure and critical, as forward communications of Battalion on our left had also broken down, and it was uncertain as to where their Right flank rested.
L/Cpl Fitts volunteered to repair the lines, and while doing so had to work under shell fire which cut the lines almost as soon as the repairs had been effected. During the whole night and early morning, he worked to and fro under this barrage until completely exhausted, and by his fearlessness, skill and devotion to duty, succeeded in maintaining communication to the rear, so that we were enabled to convey vital information to the Commanding Officer of the Battalion on our left, and to keep Brigade fully conversant with the situation.
This NCO has been with the Battalion since its inception, and has performed similar deeds of this description, particularly during our last winter on the SOMME.

He returned to Australia on 28 March 1919, marrying Doris Lillian OATS (of Elsternwick, Victoria) on 22 June 1922.
The Uncle Ricky I knew had problems walking, obviously not something he suffered before the war (judging by his citations). He had a huge (well, huge to us as children) built up shoe and later a wheelchair. He and Auntie Doris were a lovely couple and we all liked to visit them. They didn’t have any children.

Auntie Doris died in 1973 aged about 82 years, and Uncle Ricky lived out his remaining years in an Anzac hostel where my brother used to go and sit and chat to him for hours. Uncle Ricky died in 1983 during my brother’s university years.

His medals and memorabilia, including diaries were passed to his nephews and from them to the War Memorial.
Next time I go to Canberra, I’m going to make sure I have time to sit and read them. 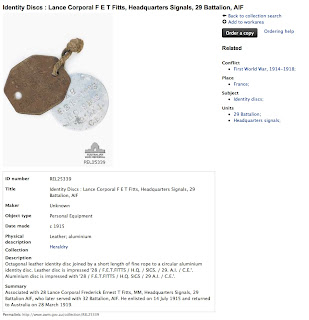 Papers of No. 32 Lance Corporal Frederic Ernest T. Fitts (Headquarters Signallers, 29th Battalion, later 32nd Battalion, 8th Brigade), from between his enlistment in November 1915 and his return to Australia in May 1919. They include three diaries (one on loose sheets) describing his service between June 1916 and October 1918 in France and Belgium as a signaller, mainly laying and maintaining brigade and battalion communication cable lines in and behind the front lines, especially in battle action around Hazebrouck/Armentieres (Bois Grenier) and Albert in 1916, Bapaume (Factory Corner, Fremicourt, Beaumetz, Bancourt) and Ypres (Dickebusch, Zonnebeke) in 1917, and Mont Saint-Quentin, Blangy-Tronville, Corbie in 1918. The diaries provide details of his movements over the whole war period. Also includes a notebook and papers concerning signals procedures and technicalities; postcard photographs of Fitts and others; paybooks and service papers; and currency and souvenirs, including a copy of the German newspaper 'Deutsche Tageszeitung'. Fitts was awarded the Military Medal.

Posted by Jackie van Bergen at 10:25 No comments:

While working on the WWI project with our historical society, I realised I hadn’t written up much about my own family Anzacs, and so this is the week to do it.

I’m going to try to put up a post each day on a WWI Anzac from my family tree.

Working with the wonderful team on this project has been a great learning experience for me, I’ve become so much better at reading service records, knowing the abbreviations and knowing where to look for all sorts of interesting bits and pieces.

I’ve realised how lucky my grandfather’s family was.
Two brothers and a brother-in-law went off to the war and they all came home and lived long enough for me to know them.
But two of them didn’t have children, so who else would write anything about them.
They should be remembered for the remarkable men they were.

Posted by Jackie van Bergen at 13:29 No comments: 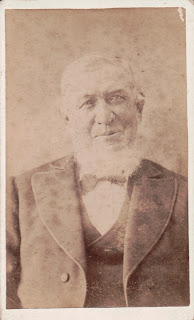 Continuing my obsession with country obituaries, this one from Bendigo…

I just love how much you can learn about someone’s life from these.

This obituary is no exception with date and place of birth, occupation and business information, arrival in Australia and family, even cause of death. 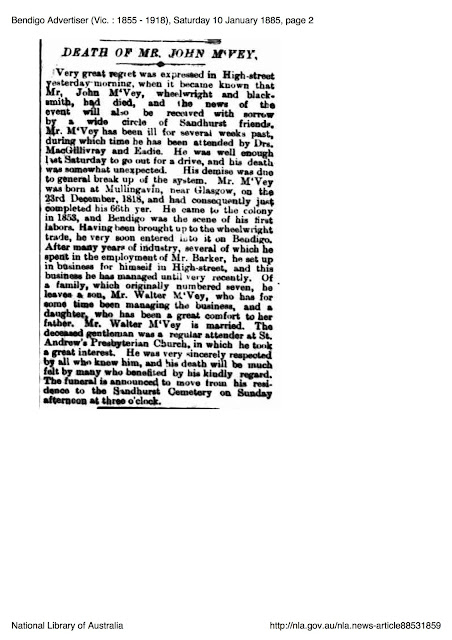 I'm working with a team at Ku-ring-gai Historical Society on a project to research and publish biographies of the Killed in Action soldiers, decorated soldiers and nurses who are named on memorials in the Ku-ring-gai area.

A huge task but we are a great and enthusiastic team that has pretty much already 'given names to' the surnames and initials on the memorials and are now collating the research.
We are about to seek volunteers to help us finish the research and start writing the bios.

It's great to brush up on my research skills and we are learning a lot from each other - it's surprising how different our research techniques are.

It's rewarding work but also very sad when you come across articles such as these two.

One is a letter (transcript as the newsprint was too long and difficult to read) written from Leonard Wykeham Hesketh to his mother in Pymble on 29 July 1916. The content is disturbing enough as it is a pretty descriptive picture of what many of our soldiers were living (and dying) in. It is made more sad when you know that Len died on 20 August 1916.

The second is the account of the death by drowning of the Hesketh's only remaining son (Len's brother) in 1921 at only 20 years of age.

I chose this soldier to research more deeply not just because he was KIA but because my Nanna's cousin, and bridesmaid married Athol Leonard Hesketh. I have not found a relationship (yet) between the two men. 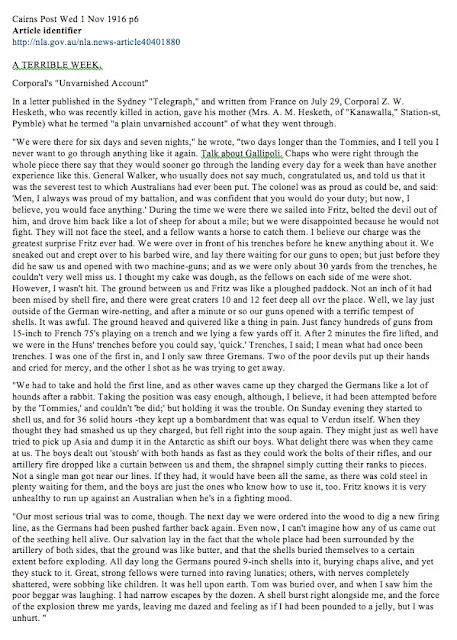