Continuing on from my last blog post about my great great grandmother’s family, I thought I would investigate whether the family in the picture could include some of Janie’s brothers and sisters. The photo did have written on it “Grenfell family” but that wasn’t to say they were all Grenfells. ‘Janie’ was Mary Jane BLUETT prior to her marriage to James GRENFELL.

Janie was one of the seven surviving children of Phillip BLUETT (1839-1899) and Mary Jane HUNN (c1837-1897) of Cornwall. Phillip and Mary Jane, along with two of their three daughters, arrived in Victoria barely a month before their first son (another) Phillip BLUETT was born in Eaglehawk in April 1871. 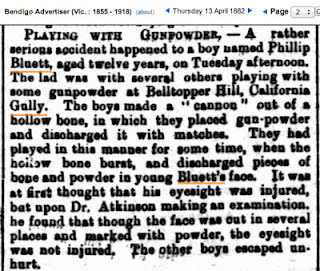 Young Phillip met with an accident with gunpowder when he was 12 years old, but obviously survived. See the Trove article.

I have now traced this Phillip to Western Australia. He seems to have moved around quite a lot, following the mining industry.

The fifth child had one of the more interesting names in my family tree,
especially when read aloud with the surname:

Hector Cyclone Bluett – and he obviously wasn’t ashamed of his middle name – see the Trove article. So often family notices only include initials, but not this one.

So, where did the ‘Cyclone’ come from?

I thought ‘maybe he was born in the middle of a cyclone’ – Western Australia is well known for them (one is bearing down on the mid north coast now). But they are not so common inland.
So, back to Trove.
There were a couple of cyclones possible for his 1904 birth registration:
16 Dec 1903: “a thunderstorm of cyclonic force” swept across Kalgoorlie and Boulder; and
29 Dec 1904: “a terrific rainstorm, travelling practically in the same direction, and almost equally with the force of that which caused so much damage to and destruction of Kalgoorlie-Boulder properties 12 months ago, swept over the district this afternoon.”
Hector went on to live marry and live until 1974. I wonder if he passed his middle name down in his family.

And, so, I got distracted from the rest of the Bluetts and whether they could be in the photo with Janie. Another time!

Posted by Jackie van Bergen at 15:21 No comments:


This photo has stumped us for a long while.
It’s labelled ‘Grenfell family’ so we have that much of a hint.
The lady standing third from the left is definitely my great great grandmother Janie GRENFELL (nee Mary Jane BLUETT) as this is the same lady as the solo photo, and her name is written on that one.

Looking at the two photos, we think the group shot is not taken too many years prior to the solo shot - maybe late 1920s or early 1930s.
I’m thinking they could be mourning – maybe a funeral gathering. No-one looks happy and almost all are in dark clothing.

I think they could be James' sisters. James was the only son of James and Nannie Grenfell and many of his sisters were widowed early.

Then, I couldn’t resist putting in a photo of a cute little kid in shorts and a bow tie!
Just like in the Sepia Saturday photo prompt – one difference, this one is not unknown, it is my little brother.

Some more about my lovely old 3x great grandfather I wrote about in my most recent post – Frederick ROWDEN.
Although the birth / baptism record I found for him has him as Frederick Artis Rowden, he called himself Frederick Augustus Rowden in Australia.
I wonder if it was a mis-print in the earlier records, or if he just liked the sound of it, or even if it was somehow inspired by his son-in-law Frederick Augustus PEARSON.

I found some good information on Frederick Rowden’s occupations, and premises, in the advertising sections of the digitised newspapers in Trove, as well as various other sources.
All good to build a timeline.

1856, there are three ads in the one newspaper. Two of these are for a wide variety of instruments for sale and a third offering tuning and repair of pianos.
1863 he was engaged to “superintend the [music and musical instrument] business” of a Mr G Chapman.
1864 - 1865 Sands directories (Melbourne), he was listed as a pianoforte maker in Stephen street.
1869 - 1870 Sands directories (Melbourne) he was listed as a piano tuner in Mackenzie street.
1882, his music warehouse at 117 Swanston street, offers “Zither lessons (easy method)”.
1883, he has a much larger ad, offering a wide range of musical instruments and “music by every steamer”.
1884, in the probate of his son there is an affidavit sworn as a surety stating, "that I am residing in George Street Fitzroy and have my place of business in Swanston Street Melbourne aforesaid". There is a mention earlier in the same document regarding No 117 Swanston St.

Many of the ads in the Trove newspapers are not well OCRd and so it is a difficult process to find what you are looking for.
Just another challenge.

With a tricky theme for this week’s Sepia Saturday – well tricky for me as I’ve been sick and my brain isn’t thinking imaginatively. 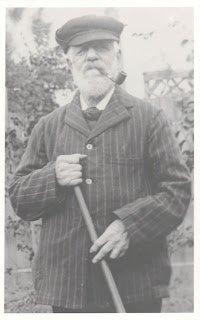 This is a photo of my 3x great grandfather, Frederick ROWDEN (1826-1919) with his hat and his pipe.
This is the only photo we have of him – this and a full length one of the same ‘pose’.
He looks like a lovely old man.
What a lot of changes he saw in his long life.

Frederick was born in the summer of 1826 in London. By the 1851 census he was living at 22 New Bond Street, Parish of St Michael in Bath, the head of the house and a sugar boiler and lozenge maker, with his mother Elizabeth.
Imagine my delight when last year on our holiday to the UK I found that house.

He married Elizabeth Deakin PARKIN in Bath in 1852 and had a daughter Mary Louisa who was born and died in that same year.
My great great grandmother Emma Laura ROWDEN was born in Bath in 1853.

Frederick migrated from the UK to Australia on the Gypsy Bride, arriving in February 1855. His wife and daughter remained behind in England and his wife died in 1857.

By 1864 when his young daughter came to Australia in the company of the lady who would become Frederick’s second wife, his occupation was listed as pianoforte maker.

I don’t know how he came to be doing this, as making pianos in Melbourne seems quite a change from making lollies in Bath!
He was listed through the years as being a pianoforte maker, pianoforte tuner, musical instrument importer, music warehouseman, and music seller.
His second wife, Elizabeth nee Bowden nee Downing had been married prior to marrying Frederick and had had a child in her first marriage that died. Elizabeth died in 1879.

Frederick’s daughter Emma had married in 1874. By 1884, she had had six children and become a widow. I wrote about this tragedy here.

It was this year (1884) that Frederick married his third wife, Martha CREASEY (c1837-1929).
When Emma died in 1889 leaving five young children. These children, including my great grandmother Florence May PEARSON (1875-1947), were raised by Frederick and Martha.

For many years I couldn’t find the record of Frederick’s death. I never thought to look in the 1900s records. He died just a couple of months after his 93rd birthday, in 1919 while WW1 was impacting Australia.

I’ll have to write more about him later – I do like filling in the stories rather than the dates.

I was contacted recently by someone who had read my post about my (great) Uncle Ricky and the sad death of his father, Frederick Arthur Fitts. Frederick had four brothers and this lady married a descendant of the eldest brother.

The widowed Constance married my great grandfather, Lewis GARRETT in April 1905. I’ve written about him a few times, including here.

All eight children were fairly close, and we grew up with heaps of aunts and uncles.

All eight children married but Rupert Fitts was the only one of the first four children to have children.

Uncle Ru had three daughters and a son. I only remember the son, Uncle Des. 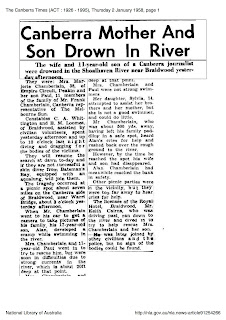 Marjorie and her 11-year-old son Paul went to the aid of her eldest son, Alan in the Shoalhaven river on New Years Day 1958.

So, one blog post about a sad death has led me to write another about a similar and related sad death. 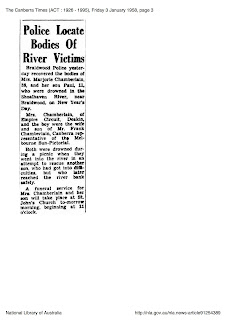 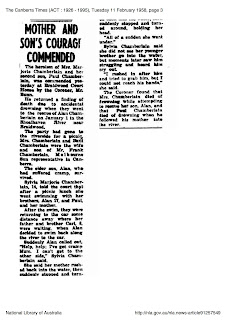