My brother was recently caught up in the middle of an unseasonal bushfire in the Adelaide Hills. Thanks to his many years (about 20 years) of fire brigade volunteering and training, and that of his son, they had taken many measures to ensure the safety of their house and themselves. (Their neighbour’s house was sadly lost).

Our grandfather John Raikes GARRETT (1908-1992) and his father Lewis Raikes GARRETT (1876-1939) were also involved in fire brigades, at Eastern Hill in Melbourne and at St Kilda. I’ve written a little on this previously and there is a photo of father and son fire fighting together in that post.

What I hadn’t known was that Lewis’ father in law, Alfred TERRY (1823-1881) was also an avid fire fighter.
Alfred was a prominent brewer and so I was sure there must be an obituary somewhere for him. I didn’t expect to find this:
…In his last hours he was very anxious about one thing…he hoped his men would maintain the honor of their corps and run for the Britannia Fire Associations Challenge Cup, which they hold and still keep. To the late Mr Alfred Terry’s exertions the efficiency of the Carlton Brewery V. F. Brigade was mainly due…
…“If a fire was any where near his place he was the first to be there, and the last to leave.”
The Britannia Cup was again won by the Carlton Brigade.

Searching further, I found Alfred had invented a “jumping sheet” or fire escape to prevent injuries in those who had to jump from burning buildings. 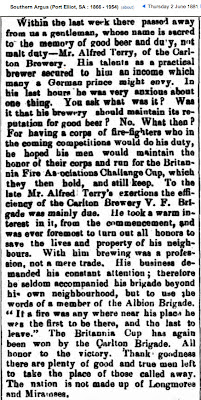 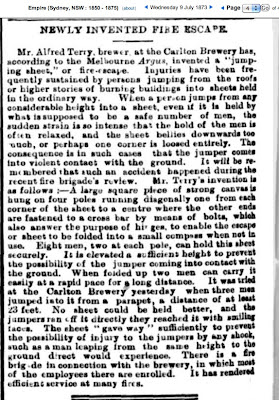 Posted by Jackie van Bergen at 14:08 No comments:

She married Frederic Arthur FITTS (1864-1902) in South Yarra on 23 Nov 1892 - the approximate timing of the first photograph - and one that I am lucky enough to have the beautiful large framed version of.

After Frederic's death by drowning, she married my great grandfather Lewis Raikes GARRETT in Surrey Hills (Vic) on 30 Apr 1905. Possibly the timing of the second photograph.

I'll write more about her another time but I haven't been well and just wanted to get something up to get back in the habit of blogging. 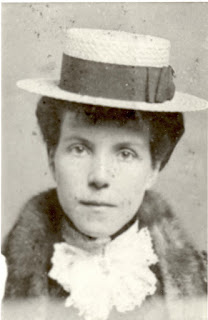 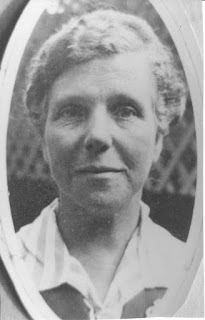 The Thomas Brooks in this death notice was my great great grandmother’s younger brother. I mentioned their parents in my last blog post: Thomas BROOKE and Jane CUNDELL.

Thomas wasn’t 80, he was closer to 82 – his birth reg shows 1858 in Mortlake, so yes he was one of the oldest native-born residents.
His elder sister was Sarah Jane Holmes nee Brooks and had died on 22 July 1940.

Their parents did not arrive in the area as early as 1838.

Thomas Brooke (senior) married Jane Cundell at St Matthews, New Norfolk in 1844 and their first daughter, Mary Anne, was born in Tasmania seven months later. Thomas had arrived in Tasmania in 1831 on the Lord Lyndoch (1).
In 1845, Thomas was granted his conditional pardon and was required to leave Tasmania. He was employed at Mt Shadwell and arrived in Victoria in October 1845.

Jane, pregnant with my great great grandmother (Frances Eliza), remained in Tasmania until after the birth in Feb 1846. She had joined Thomas by 1848 when the next daughter, Isabella was born (in Mt Shadwell).
Jane had arrived in Australia in 1840, as a free 18 year old nursery maid. Her parents were already here, but that is a whole other story.

The second article is something amusing I saw in the course of searching for the death notice: children raising funds for the war by catching rabbits! 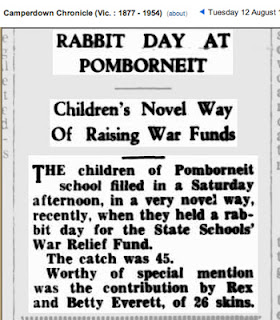 Posted by Jackie van Bergen at 21:59 No comments: