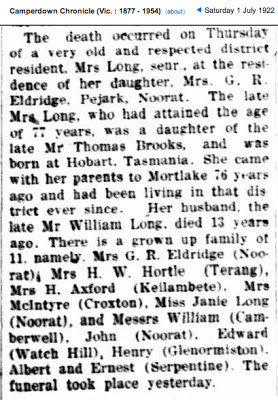 Ninety-one years ago yesterday, my great great grandmother died aged 76 in Noorat, in Victoria’s Western District. Here is her obituary.

Thomas wasn’t around for her birth.
He had just got a conditional pardon that stated that he was to leave the colony of Tasmania and was free to settle in Port Phillip, so he left in October 1845 and settled in Mortlake. He worked for Robert Burke at Mt Shadwell.
I posted his death notice last month.

Jane was halfway through her pregnancy, and with two other small children, remained in Tasmania until after the birth of Frances in Feb 1846.

She married Yorkshire born William LONG (1838-1909) on her 17th birthday in 1863, in the Church of England Mortlake. Her parents were the witnesses.

William worked in the flour mill at Mortlake, and this town is where he and Frances had their first five children.

My great grandfather Edward LONG (1872-1951) was the first of their children to be born at Laang where William had taken the job of manager of Aikman’s sawmill.

Between 1863 and 1887, Frances had 12 children, all except one surviving to adulthood, and the last two were twins (see my rabbit blog post for one of them). Her twins were born four months before she turned 42 years old, and the same year as her oldest son became a father.

Frances outlived her husband by 13 years.
I don't think she would have been too lonely, as most of her children remained living in the Western District with almost all of her grandchildren being born in the area too.

The family I knew never talked about Thomas being a convict - maybe they didn't know, or preferred not to.
I didn't find out until much later when I found the application to marry for Jane and Thomas and it had the give-away T/L beside Thomas' name.

Posted by Jackie van Bergen at 12:58 No comments:

Continuing on from my ‘theme’ in my last blog post, I found some articles from the area where Uncle Abbie lived regarding rabbits.

I couldn’t resist these two…
... one about how clever the rabbits were at Terang in avoiding the shooters,
... the other about bringing rabbits to a Debating Society to donate to destitute people in Melbourne.

…and what more can I say but don’t you just love country newspapers on Trove! 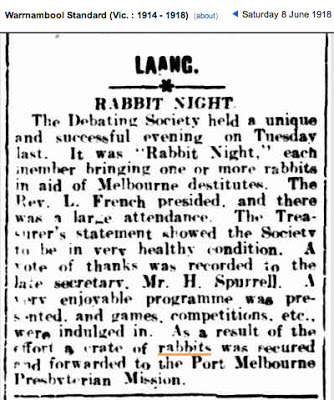 This photo is of my Mum’s great uncle Albert, known as Uncle Abbie. 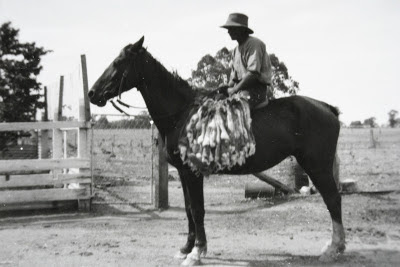 It was most likely taken during the rabbit plagues that swept through country Victoria in the late 1940s.
The family had property around Laang, Glenormiston, Panmure and Terang.

Albert married Elsie May HOLMES (1900 – 1984) and had four children. They were both born, married and died in Victoria’s Western District – along with most of that side of my family. 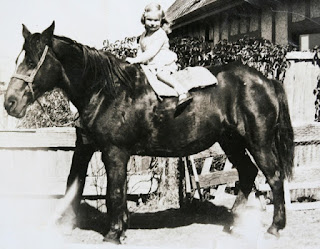 Then, for the ‘cute’ factor, here’s another horseback photo – one of my Mum! She said it’s just for show as she couldn’t (can't) ride!
Posted by Jackie van Bergen at 16:58 17 comments:

I’ve written about her parents a couple of times before, especially her father FrederickAugustus PEARSON (1848 – 1884).

May was just nine years old when her father died. She was the eldest of his six children, her youngest brother not yet one year old at the time his father died.

At age 14, her mother died and the children were then raised by their maternal grandfather, Frederick Augustus ROWDEN (1826 – 1919) and his third wife – he was widowed twice, and lived to the amazing age of 93 years.

May married relatively late for her time, at the age of 30 to William Collier FRANCIS (1864 – 1946) who was 41 years old. Coincidentally, he was also born on a Wednesday.

They had five children, my grandmother was the middle child.

May died just a little more than a year after her husband at the age of 72 in Oakleigh, Victoria.

Dad was barely 10 when she died but remembers the following:
I remember Oakleigh had a lot of land around the house. Much later it was subdivided into 6 x ¼ acre building blocks.

They had poultry and produced eggs. She grew small plots of lucerne and oats to put through a "huge" cutting machine in the large barn for green feed. She also had large veggie garden and berries (gooseberries and never liked them) and many others. (Her daughters, my Gren and her sister were avid veggie gardeners too)
She always wore an apron and dark clothes - maybe this was after her husband died. In later years, she spent a lot of time close to the wood stove burning what looked like incense to help her breathing. (She was asthmatic - something passed on to many descendants)
At the time, Oakleigh was quite rural as I remember walking across vacant land to get fresh milk from the dairy. It was always good to drink the warm milk when bringing the billy home.
A highlight of most days was following the bakers cart , the iceman and butcher not only to get a sample but to collect the horse manure for her veggie garden. I never followed the night man!

Posted by Jackie van Bergen at 12:00 No comments: 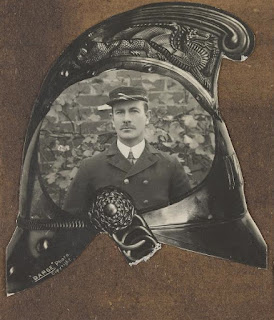 I noticed that a few other bloggers were having a ‘photo week’, so I’ll stick to that theme too.

An unexpected find on Pictures Australia, part of Trove, and out of copyright too!

My great grandfather, Lewis Raikes GARRETT (1876 – 1939) who I have written about a number of times before.

Lewis worked for the Metropolitan Fire Brigade for 33 years, from 1906 until his death in 1939. Here is a great photo of him in his younger years as part of a larger compilation photo.

I have added a couple of photos from our family collection too. 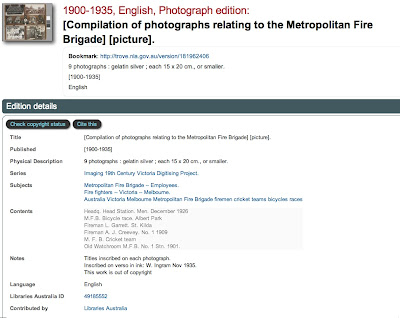 This post is in part inspired by the Sepia Saturday blogging prompt, and by the photos and papers shown to me by my mother earlier this year.

Mum says she couldn’t get enough of us when we were little.

There weren’t many options open to unmarried country girls in their mid 20s in the mid 1920s, so Nanna and her sister trained in mothercraft nursing. 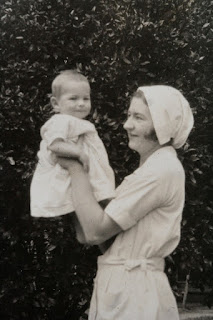 Mavis Fanshawe LONG (1906-1982) and her sister Frances Jean McVey LONG (1901-1988) moved to the city and trained at the Foundling Hospital and Infants Home in Berry Street, East Melbourne and Beaconsfield.

Berry Street was founded in 1877 by a group of Melbourne women with the help of the wife of the Governor of the time. In 1907 they implemented a formalised mothercraft nurse training program that continued until 1975.
Nanna got her certificate in 1933 at the age of 27.
You can read more about the history of Berry Street here.

It was at Berry Street that Nanna befriended Shirley Constance GARRETT (1912-1978), a fellow nurse from nearby St Kilda.
It was through Shirley and visiting her family that Nanna met her husband, Shirley’s brother John Raikes GARRETT (1908-1992).
They married in 1935. 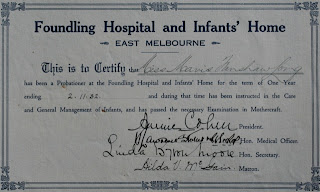 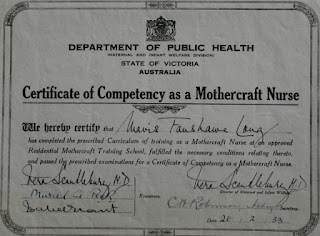 Trove Tuesday – In the line of Fire(men) 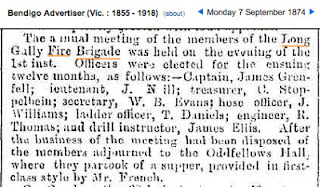 Continuing on from last week’s post about fire fighting relatives / ancestors, my Dad reminded me that his side of the family had a fire captain too.

My 3 x great grandfather, James GRENFELL (1833 – 1896) was the first captain of the Long Gully Fire Brigade (near Sandhurst / Bendigo).

James had arrived in Australia with his wife Nanny HATTAM (1836 – 1915) and four children in July 1866 on the FitzJames and settled in the Sandhurst area.

James was mine manager of the Old Chum Mine, Long Gully – more about that another post – this one is about fire fighters.

In August 1875, Captain James Grenfell received “a very handsome tea and coffee service…in appreciation of his services as captain for the past two years”. (I wonder where that went!)

I found a number of articles about his ‘great work’ but no photo yet. I’ll keep searching.

I have included a couple of photos (not from Trove): my brother and his son (just qualified this year) in their fire fighting gear - scroll right down.
They are 3 x great grandson and 4 x great grandson of Fire Captain James Grenfell – a long line of firemen. 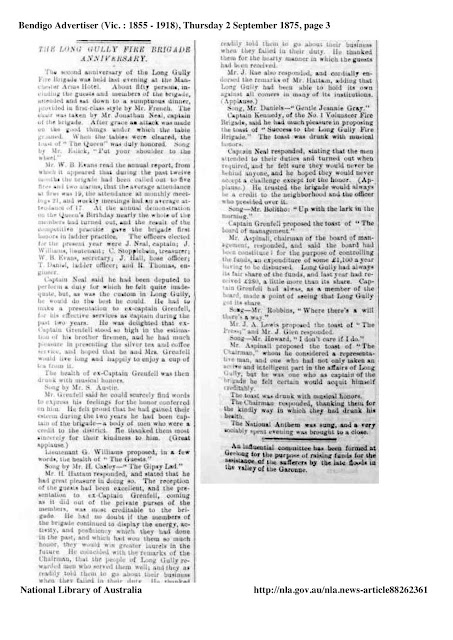 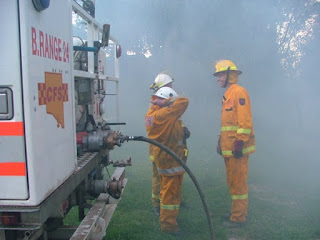 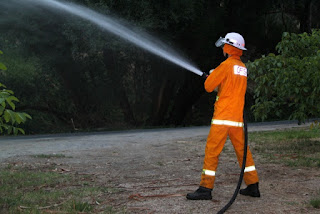 Posted by Jackie van Bergen at 14:39 No comments: