Loitering in the Louvre 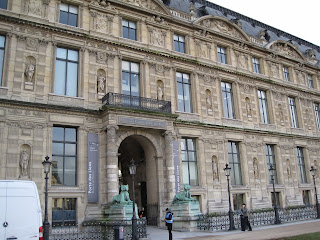 Thanks to friends back home who alerted us to the ‘quick’ way into the Louvre, we got in at about 10am with only 3 people ahead of us in the queue.

This was even more amazing as the Louvre is closed tomorrow and Wednesday (because of New Year’s Day).

Others were not so well informed and queued for what must have been hours. Even when we left, we passed a huge queue.

Inside, I braved the milling masses to get up close and personal with La Joconde (the Mona Lisa).

Then we wandered quite aimlessly through corridors and halls taking in all the sights – paintings, statues, sculpture, ornaments and crowds.

I found the ceilings as interesting as what was on the walls.

It was hard to know what to put on the blog, so here are more photos than I usually put up. 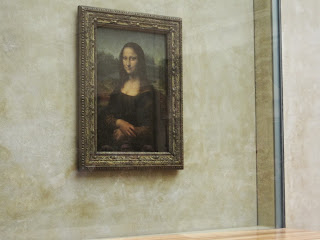 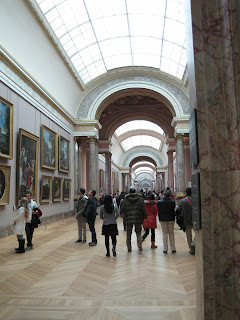 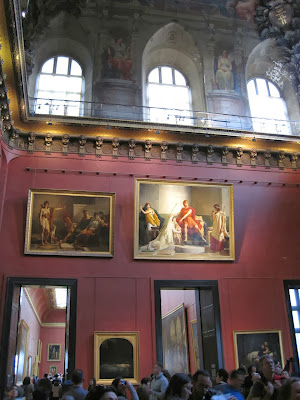 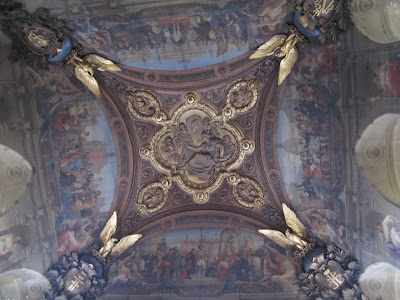 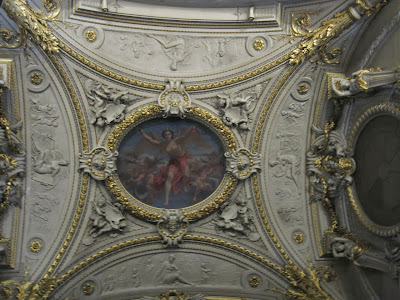 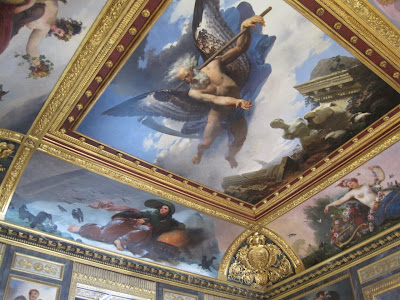 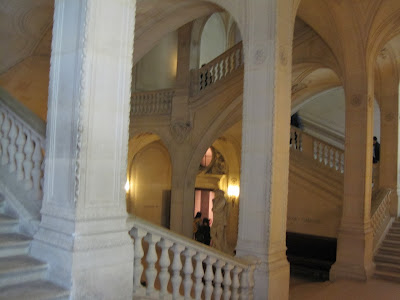 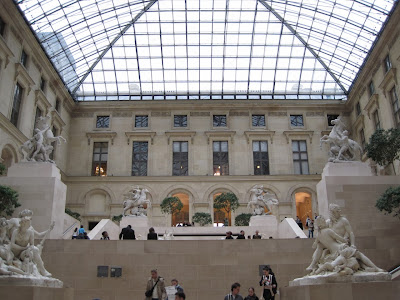 Paris turned Gold for us!

Exactly three months ago we booked to go to Le Jules Verne restaurant on the second level of the Eiffel Tower.

We must have been one of the first to book for this sitting as we got one of the best two tables in the restaurant.

We had a view over the Seine to Sacre Coeur, the Louvre, the Notre Dame and more.

It was expensive but it’s one of those once in a lifetime things I guess.

We chose the smaller of the two degustations, so we each had: two entrees, one main and two desserts.

Yes, two desserts – one lemon and one chocolate!

So I think then Paul conspired with the restaurant to make me walk down the stairs after lunch – we went for a look outside and got locked out!

I chose late lunch hoping to see Paris in daylight and then as the lights came one with the early sunset.

We got better than that – the whole of the city turned gold as the sun started to set.

The oohs and aahs in the restaurant were almost deafening in the amazement.

Here are some photos of the delicious food (and views).
Click on the photo to make it bigger.

(I bet you are hungry now Mum!)

Out and about in Paris 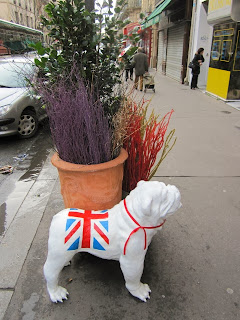 Too tired to write as we have walked almost 18,000 steps again, and over half of mine were in heels!

I’m going to let the photos tell the story today and write about our special lunch when we wake up in the morning. 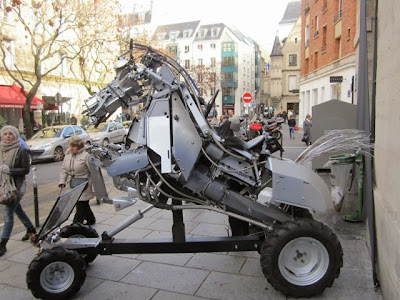 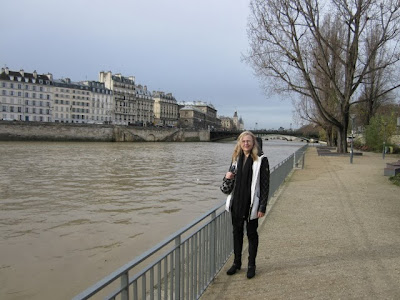 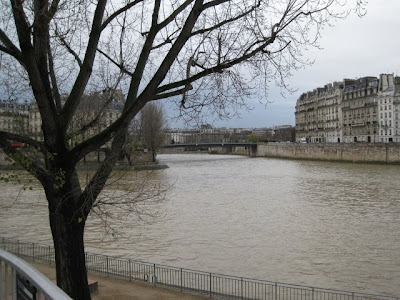 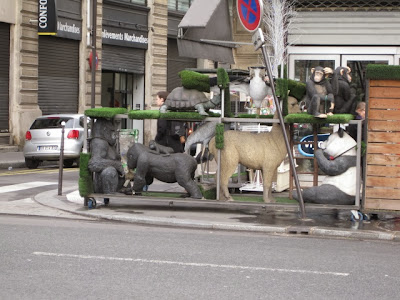 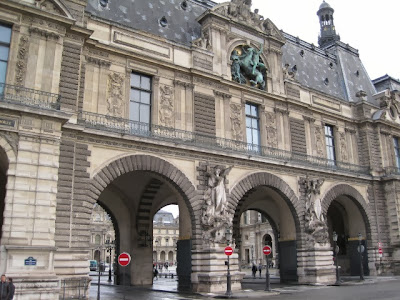 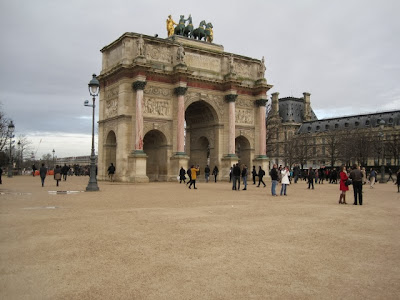 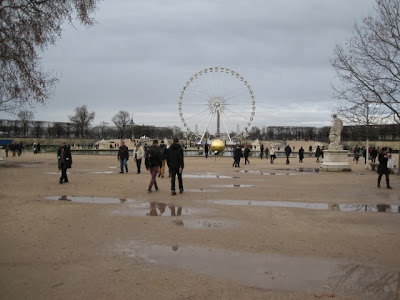 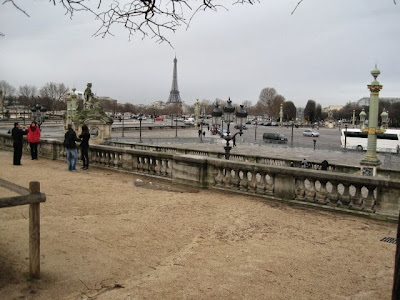 Posted by Jackie van Bergen at 08:01 No comments:

Excitement on the train to Paris

Goodbye to Amersfoort and the cousins.


Today we caught a train from Amersfoort back to Amsterdam to get the fast Thalys train to Paris.

Driving rain and much colder today, so a perfect day for travelling (although don’t see much out the windows).

The train to Amsterdam was standing room only as this is the first day after two days holiday – lucky we haven’t done much shopping yet and both bags are well under 20kgs.

There is free wifi on the Dutch intercity trains, and on this train too – what a shame the Aussie trains can’t provide the same service.
They even have a power point for every seat so for charging our gadgets and computers.

At the recommendation (partly because of price) of our wonderful travel agent Bryan Wye we travelled 2nd class to Paris. The seats were large and comfortable and plenty of leg room for us tall people.
The train was really full – obviously Paris at New Year is a big drawcard for tourists.

Mr Jax said he knew when we crossed into Belgium as there were no bike tracks beside the roads.
He cheekily added that if we were still in the Netherlands, all the fence posts would be the same size (neat!). 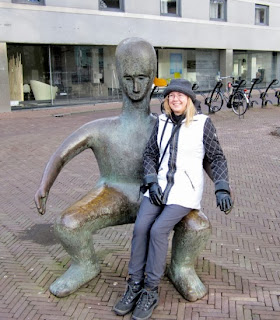 Then, an hour and a half into our journey we came to a stop.
There was a bomb scare in Antwerp station (our next scheduled stop).
We had to backtrack to a small country station where we sat for the next two hours 20 mins.

It could have been much worse, as if it had been on our train, we would have had to get off and stand in the horizontal rain and freezing wind.

Paris at last, 5pm – only 2 ½ hours late and dark. Of course being Friday night now, the taxi queue was huge.

Here are some photos from Amersfoort before we head out to the Paris streets for dinner. 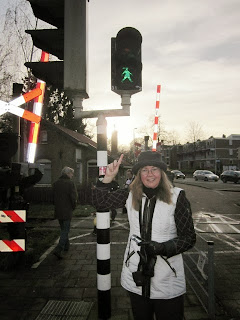 Some more Christmas decorations - if you click on the photos you can see a larger version: 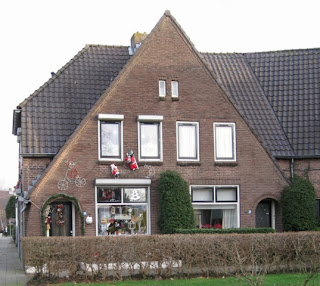 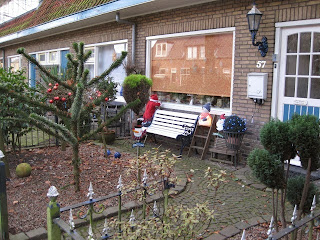 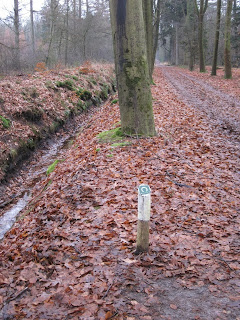 
A foggy morning provided the excuse Jackie was craving – to chat with the cousins, catch up with washing and bake some Second Day of Christmas cookies (the concept of Boxing Day not spreading across the Zuiderzee to Holland).

This left ‘the scout’ armed only with Google maps and knowing that the sun is in the south, to explore the woodlands and small farm holdings of Leusden.

This part of Holland was one of the earliest (13th Century) to reclaim land through neat drainage systems enabling the farmers to grow initially grain and eventually cows. 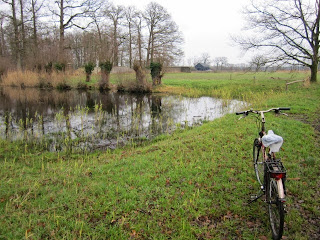 Some hairy, belted Galloway cows (how very neat of the Dutch) mooed contentedly as the cyclist pedalled past on the bicycle provided by his cousin (another Paul).

The more familiar Friesian cow failed to moo back despite attempts by Paul, with the neighbours cow completing the cowboy experience!

The sculpture by Thijs Trompert indicated weird wildlife can be encountered by eating the spacier type of cookies! 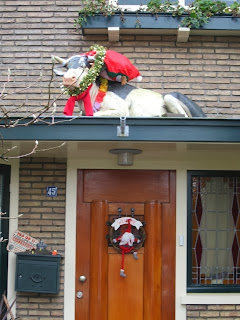 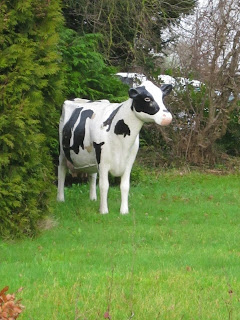 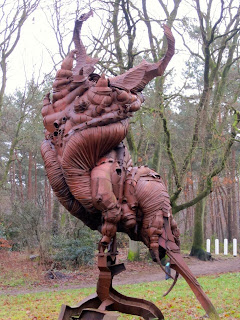 A Heritage walk around Amersfoort

Rest day from blog yesterday as we got chatting and eating with cousin Paul, and his daughters Nienke and Isabel.

The temperature was pretty mild for this time of year so we went for a long walk around the old town in the afternoon.

The sun was shining but it’s weird seeing it so low in the sky by 2-3pm.

Cousin Paul was a great guide as he is an archaeologist and works in the Cultural and Heritage Office.

There are two ‘city walls’ here, the first constructed in the late 13th century and the other about a century later when there was a need to enlarge the city.

I find it quite amazing walking around here - coming from a country like Australia where there were no permanent dwellings for many centuries after those still standing here.

Remains of settlements dating back to 1000BC have been found in the area. Posted by Jackie van Bergen at 20:48 No comments: