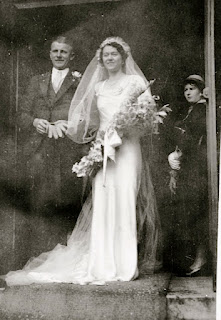 Not exactly something from Trove but something I may not have learnt if it wasn’t for my initial finding in Trove.

Some weeks ago my Trove Tuesday blog was about a ‘tall bride’ marrying my Nanna’s cousin. I wondered how tall you would have to be to have it pointed out in a newspaper item about your wedding.

I was at my parents’ house and going through some photos with Mum. Mum was reading the back of the photos when she didn’t immediately know who was in the photo.
“Here’s one of Billy and Ethel Stonehouse,” she said. “Where do they fit in?”
Out comes the family tree program and the search key.
Only one option in my program: William Hill Stonehouse and Ethel Lee married in 1936.

And, one good look at the photo and you can see how tall the newlyweds are – look at the lady standing next to the bride!
The groom looks pretty tall too, but then my Nanna was 5 foot 9 inches, quite tall for the early 1900s.

What a shame there were no photos of the ‘uncommon frocks’ of the bridesmaids.

So it seems that my Nanna and Pa were at the wedding after all.

Share your Trove finding with your family, you never know what memories or photos they will prompt! 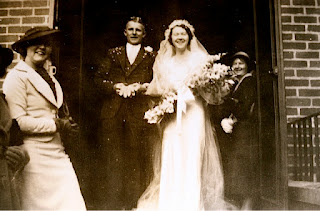 Posted by Jackie van Bergen at 18:27 No comments: 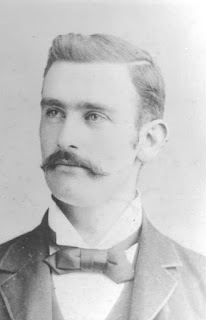 My great grandfather, William Collier FRANCIS was born in Australia on 27 April 1864 to Welsh-born parents. He was a farmer at Yinnar, Gippsland, Victoria and later a salesman.
He married late, at 41 years to Geelong-born Florence May PEARSON (1875 – 1947). My grandmother Mary Waveney Kathleen FRANCIS was their third child.

He died just before his 82nd birthday in 1946. My Dad remembers him as “an old man who used to sleep in the built-in verandah. He wore blue and white pyjamas and had a mass of white hair”.

William was a member of the 4th Victorian Contingent (Victorian Imperial Bushmen) and served in South Africa in the Boer War from May 1900 to Jun 1901. His son, my Uncle Jack, told me “he came home via Albany in Western Australia and walked to the goldfields in Kalgoorlie”. His medal has the battles on bars on the band - Transvaal, Orange Free State, Rhodesia, Cape Colony, South Africa 1901.

An amazing find on Trove has enabled me to ‘hear the words’ of my great grandfather by way of a letter published in his local newspaper, the Morwell Advertiser in May 1901. (I have transcribed it below the articles.)

As an aside: The Victorian Mounted Rifles were the first to wear khaki uniforms and the slouch hat, and established the mounted infantry model which was adopted by other colonial forces. 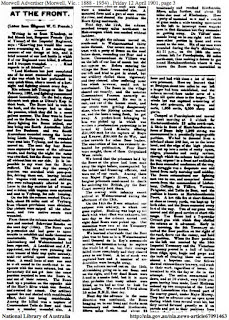 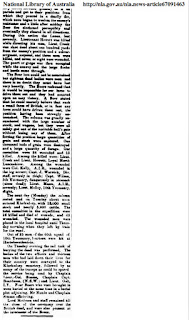 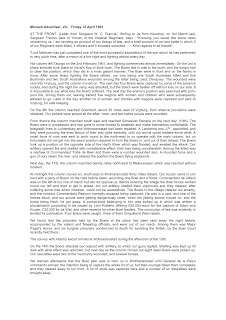 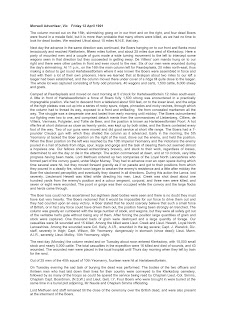 Posted by Jackie van Bergen at 12:10 No comments:

On a recent visit to my parents, my Mum mentioned something about her Pa and the funny little poems he used to write and post to her when she was a little girl. Mum lived in Melbourne and her Pa lived in Victoria’s Western District (in Beeac, then Cressy and Colac).
I had never heard about any such poems before and it didn’t take much prompting for Mum to bring them out.

There are definite benefits in having a mum who is a hoarder – she has bundles of poems and letters, photographs, souvenir booklets and even tickets to events!
(More of that later)

Mum’s Pa was Edward LONG (1872 – 1951). I would have liked to have met him but he died when my Mum was in her teens.
Here are a couple of his funny little poems – sent to his little granddaughter:
To Janet and Ann from Pa
Once upon a time there were two little girls
Who stood on the gate with their hair in curls
And watched the train as it raced past
And waved their hands so very fast
That the driver smiled and waved them back
As he raced the train along the track
But since they left he missed them so
That his wistle he never now does blow
But when they come back to watch the train
You will hear his wistle blow again

We have a little house
Down the path
When you get there
It makes you laugh
G.P.O.

And when his wife went to Melbourne to stay with the girls (my mum was 'Mrs Smith' and her sister was 'Mrs Brown):
To Janet and Ann from Pa

I miss Mrs Smith and Mrs Brown
Since they have gone back to town
But now they have their Nanna to mind
I know she will find them very kind.

But don’t give her too many ice creams
As she might wake up in the night with dreams
Put a nice hot woolly round her head
And make her sit up for her toast in bed.

Mackie came in with a very full tummy
The reason was he had caught a bunny
And ate it all but one hind leg
And therefore couldn’t sit up and beg.
x x x x from Pa

Two little girls from far away

Posted by Jackie van Bergen at 16:12 No comments:

Following on from an earlier blog post Hints for Unmarried Girls,
I found another, with the much earlier date of 1903,
this time in the Clarence and Richmond Examiner (Grafton, NSW).

As the article finishes: poor unmarried girls, what hope did they have?

What a pity they didn't include photos or sketches of the 'nose types'!

Some of the descriptive terms are interesting:
'aesthetic finish of the tip of the nose',
'moderate hum on its upper half',
'tip-tilted'

Must go and check my husband's nose :)

Posted by Jackie van Bergen at 15:59 No comments:

Pa on the Front Page

Oaks Day – Ladies Day at Flemington – a day I have often gone to the races.

It is less crowded than the cup and the fashion is more refined (for most).

With our chicken and champagne, and our manicure from the L’Oreal tent, we gave little thought to the work behind the scenes (see my Cup day post ).

An appropriate day to post some photos and articles associated with my Pa’s business: 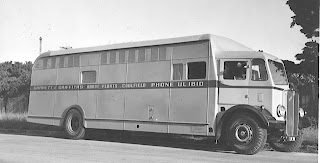 Posted by Jackie van Bergen at 09:34 No comments:

Melbourne Cup Day has always been a bit special for me.
Not always so for my Pa or my Dad – it was one of their busiest, stressful and most exhausting days of the year – more about that later in the post.
Pa, John GARRETT (1908 – 1992) had one of the biggest racehorse transport companies in Australia – Garrett and Griffiths.
My Dad worked for him for several years, including driving trucks especially on the busy days like Cup Days.
Us kids used to go to races with Pa or Dad quite often. It was a very different view of the races than what I have experienced as an adult – going in the grandstand or the members’ car park. Then, we had to keep out of everyone’s way although I did get to pat Rain Lover one of the years he won!
I was talking to Dad about his experiences at the Melbourne Cup and whether he saw Jean Shrimpton. He said he was only a couple of metres away from her.
Dad recalls having a chuckle about the reactions and all the fuss made by the “old matrons” over “this young bird who had no hat, no gloves and a very short skirt”. Dad said she was “a very pretty, slim girl”.
Dad wasn’t that fussed – but then he was married to a pretty, slim girl!

The ‘other’ side of The Cup in the words of my Dad (a driver in the 1960s):
Garrett and Griffiths would have taken about 40% of all horses that ran on each day of the Cup carnival.
We would often start work at 4am on Cup Day to take horses for track work or even for a walk on the beach. Trainers had different warm ups and often gave very short notice.
People probably didn’t realise that we would take a load out to Flemington for the earlier races, tear back to pick up horses for later races, get them to Flemington, unload, then reload with the horses from the earlier races to take ‘home’, then race up to pick up the later races horses. We did a very large number of miles each of the days. There was only one driver per truck and we had to give the truck a really good clean out between each load of horses. There was a strapper travelling with the horses but they didn’t help clean – it was their job to get the horse settled.
There was enormous pressure to get the horses there on time and not have them shaken up by the ride in the float – could sometimes be difficult in the heavy traffic.
The trainers and owners were very edgy waiting for the horses to get unloaded. They didn’t want the horses there too early, standing around in the crowd but there were regulations that the horses had to be there a specified time before the race.
Your Pa (John Garrett) was always uptight on Cup Day and would get very edgy about us getting back in time – no mobile phones in those days.
One of the great jobs we had was to pick up the ‘clerk of the course’ horses from the police stables in St Kilda Road. I think the building is still there – a magnificent old building that even had a mounting yard inside.
Sometimes we would be given a good feed by one or other owner or trainer in their posh tents, or champagne and fancy food out of the back of their Rolls Royce.
I carried Piping Lane, and Rain Lover twice.
Not to do with Melbourne Cup Day, but still to do with Garrett and Griffiths: We were probably involved with the first mass shipments of horses to Korea – in a converted 727. They were ‘second string horses’, sent over to re-start the Korean racing industry because during the war they had had to eat all the horses.

Posted by Jackie van Bergen at 09:49 No comments: