I’ve decided to respond to this week’s Sepia Saturday prompt with a photo of three men: one of my favourite photos of my grandfather (centre) and two of his brother’s in law.

This photo was taken in 1937, when they were celebrating the birth of my father, the first child among the three of them.

I love the sense of fun and happiness in this photo.

Little did they know that just a few years later these three men would go off to WWII and only two would survive.

From left to right:
Halley Edward HAWKINS (1910 – before 1997), known as Uncle Hal married my grandmother’s little sister Enid Laura FRANCIS (1913 – 1997) in April 1936. They didn’t have children until after the war. Uncle Hal enlisted in July 1940 and was discharged in October 1945 as a Lance Sergeant in the 2/8 Australian Infantry Battalion.

Keith Leo GRENFELL (1911 – 1944) my grandfather married my grandmother in February 1936. I’ve written about Gren before, here.
Keith was in the Citizen’s Military Forces (like the Army Reserves now I think) from about 1930 so was snapped up as a training sergeant into the army as WWII broke out. He had a series of illnesses and complications following an injury from a gun during a training exercise. I’m still wading through his extensive military and medical files trying to make sense and a timeline from them. He spent a lot of time in different army hospitals and rehabilitation centres. My dad can vaguely remember as a little boy catching the train up to the city to visit him in a ‘huge’ hospital. Keith died in their local hospital in Yallourn before his second son reached his first birthday.

Mervyn Collier FRANCIS (1918 – 2008), known as Uncle Jack, my grandmother’s little (or I should say younger as he was soooo tall) brother. I have written about Uncle Jack before, here.  Uncle Jack enlisted in the AIF in January 1940 and was discharged in September 1941 before joining the RAAF (air force) in October 1941. He was a Warrant Officer at RAAF HQ in Washington, USA by the time he was discharged in March 1946. He had come home to marry in February 1944 just a month before Keith died.

And I’m pretty sure the following is the only photo in my collection with braces. It’s my dad (on the right) after he had been in his own wars: broken his neck falling off his bicycle. He is with his little brother (left), and their Uncle Jack (see above) who was like a second father to them. Uncle Jack died in 2008 and dad’s brother in 2009.

Geniaus has asked fellow geneabloggers to join in and answer a few questions for National Family History Month.
Here are my answers:

What are the titles and URLs of your genealogy blog/s?
Jax Trax at jackievanbergen.blogspot.com.au
co-blogger at Ku-ring-gai Historical Society

Do you have a wonderful "Cousin Bait" blog story? A link to a previous blog post might answer this question.
I never expected to have so many contacts.
I have had two contacts from people writing books about people linked to my family. Both of these have been able to provide me with more information and even photos of my ancestors and their relations.
Some cousins have contacted me through my blog, and I have identified others because my writing inspired me to research a particular branch a bit further.
Since writing the blog I have the following new cousins:
-       Anne in NZ who has sent photos of oil paintings of our common 4x great grandparents
-       Karl in Canberra – our grandfathers were brothers
-       Susan in Perth – our grandmothers were first cousins.

Why did you start blogging? Is there someone who inspired you to start blogging?
I went on my first trip to Europe and decided this was the time to get in the habit of writing daily so that hopefully I could continue writing when I came home – it worked!
Jill of Geniaus joining our local society was also an inspiration.

How did you decide on your blog/s title/s?
I wanted to combine a travel blog with a geneablog and I thought my tracks and then the tracks of my ancestors might work.
A glass or two of red wine and the wit of Mr Jax helped too.

Do you ever blog from mobile devices? What are they?
My trusty well-travelled MacAir.

How do you let others know when you have published a new post?
I don’t really, although if I have written about a specific side of the family I might email a cousin or two to look at it.

How long have you been blogging?
I started the travel blog in April 2012 and it morphed into a geneablog in July 2012, although there were certainly some genealogy parts to my travel - Maastricht, Fromelles, Cornwall, Bath.

What widgets or elements do you consider essential on a genealogy blog?
Search and past posts archive. I keep meaning to look at putting more on but too many other things keep getting in my way.

What is the purpose of your blog/s? Who is your intended audience?
My intention is to share with my family the huge amount of research my mum and I have done, and the ever-increasing number of old photos that my parents have. Along the way, hopefully new-found members of the family will be found and join in. I also hope to interest other members of the family (eg my brothers) in our family history by putting it in a short easy to read form that is interesting enough for them to read.

Which of your posts are you particularly proud of?
All of them! It’s great to write and share but it doesn’t always come naturally.

How do you keep up with your blog reading?
I follow blogs and they show up in my dashboard page of blogger.

What platform do you use for publishing your blog/s?  Blogger

What new features would you like to see in your blogging software?
I’d like it to be easier to cut and paste into the blog without losing formatting and without the font changing.
It would also be great if it was easier to place photos – they often seem to move when I preview.

How do you compose your blog posts?
Look for inspiration (photo, someone else’s blog or just a whim) and just write.

Do you have any blogs that are not genealogy related? If you wish please share their titles and URLs.
Many posts not genealogy – I started as a travel blog.
The KHS blog also has many as it also covers local history

Have you listed your blog/s at Geneabloggers?  Yes

Which resources have helped you with your blogging?
TROVE, Mum’s amazing collection of photos, and blogging prompts such as Trove Tuesday, Sepia Saturday and others from Geneabloggers.

What advice would you give to a new Geneablogger?
Just do it – it doesn’t matter how much you write, just get something out there.
If you are stuck, pick a prompt and write to it. There are so many things in Trove, or choose an old photo and contribute to something simple like Wordless Wednesday or Sepia Saturday where you don’t have to write much at all.
Sepia Saturday is good to join in on because you get lots of comments and feedback so you feel more like keeping going. But you should make comments too – if you read a good post, let the blogger know you liked it.

Extra: An added benefit of blogging:
Mum and Dad are sharing more information. I always thought we talked a lot about family history but aspects of my blog bring back memories that they now share. They have also been a lot more forthcoming with other pieces of family memorabilia, photos, books, certificates, even an engraved silver teapot.

Searching for any information on my 2x great grandfather’s family is not easy.
Their surname is LONG!

What does make it a little easier at times is he and his brothers arrived here (mostly) as LONGBOTTOM.

Here was an easy way to find the arrival of two of the brothers: Timothy and John, the two eldest in the family – a trial in which they were witnesses, and gave conflicting evidence.

I wish all arrivals were this easy.

As soon as I saw this week’s Sepia Saturday photo prompt, a particular photo came to mind.
This photo was taken at Sovereign Hill, Ballarat, Victoria – a fabulous outdoor ‘living’ museum of the area’s goldfields in the 1850s.

An added relevance of this photo is that my Trove Tuesday post this week was regarding the Eureka Stockade uprising that happened very close to where this museum is located in 1854, and in which I have just discovered my 3x great grandfather played an unexpected role.
Also, the photographer was my Mum’s cousin! 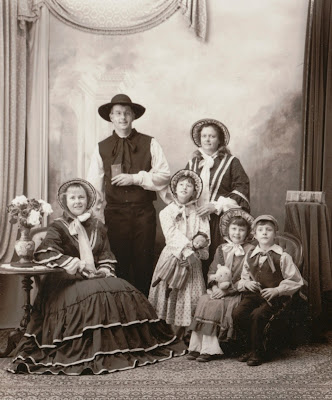 Despite the clothing and setting, this photo was taken in the late 1990s.

My girlfriend and I went off in one direction to get dressed up in clothes of the era while the kids went in another direction, and my husband muttering about being a landed gentleman went off with the photographer.

We were surprised to come back out to the photo setting and find Mr Jax all dressed up as a preacher.

We joked about the preacher and his two wives and three children!

How many of you have had similar photos taken?

Did you ever wonder (like I am) what the family historians of the future will make of such photos? – just as we Sepians are trying to make something of the prompt photo! 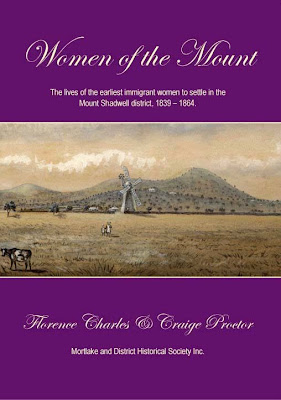 Last night while checking my facebook I saw a post from Mortlake & District Historical Society regarding a book Women of the Mount.

It had completely sold out and they were announcing more copies would be printed.
This book is about “The lives of the earliest immigrant women to settle in the Mount Shadwell district 1839-1864”.

I commented about them being tough ladies and glad it featured my 3x great grandmother Jane Brooks.

Within the hour there was a responding comment from Susan asking if I was referring to Jane Brooks nee Cundell / Condell as she was her 3x great grandmother too.

A bit more to-ing and fro-ing, and a new friend on facebook later, we found we are not only both descended from Jane Brooks, but from the same daughter.
Quite a find as Jane had 12 children, and over 50 grandchildren.

So now, Susan and I share the same great great grandparents, Frances Eliza Brooks and William Long.
I am descended from their middle child, Edward Long and she is descended from the youngest, Ernest Long. Ernest is the twin of mum’s Uncle Abbie who I wrote about earlier.

As Susan lives in Perth and I live in Sydney, it could be some time before we actually meet, but in the meantime, the facebook and emails might keep us going.
Turns out we are almost the same age, our Nannas were first cousins and her grandmother is still alive and living just 20 minutes from where my parents live!