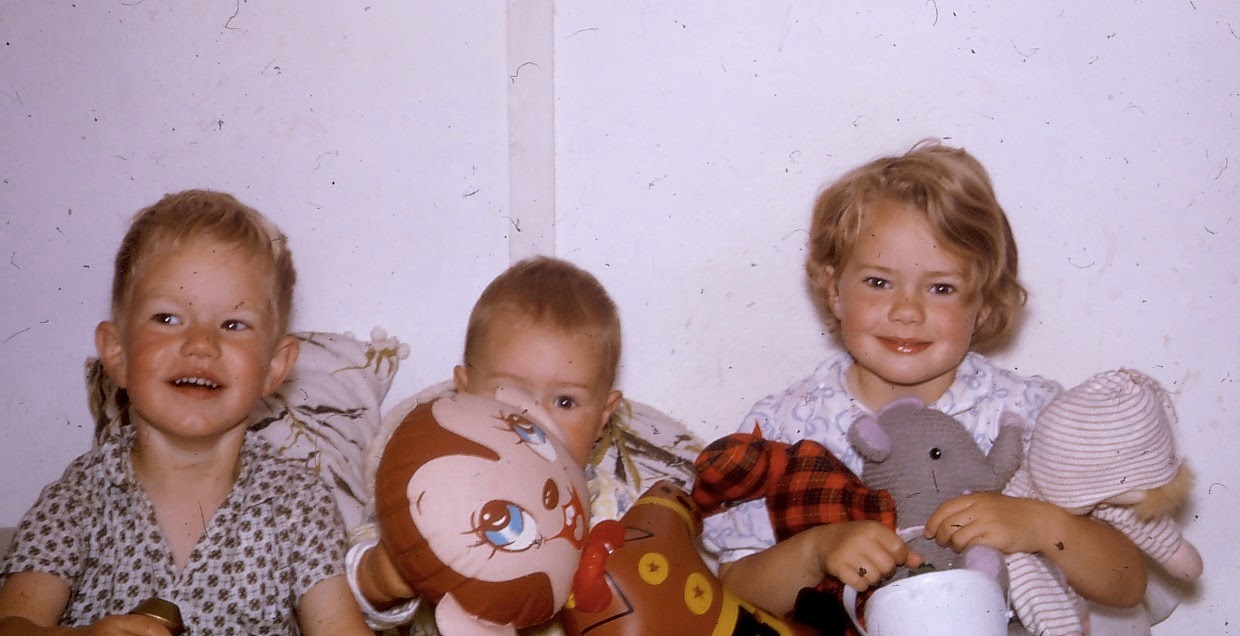 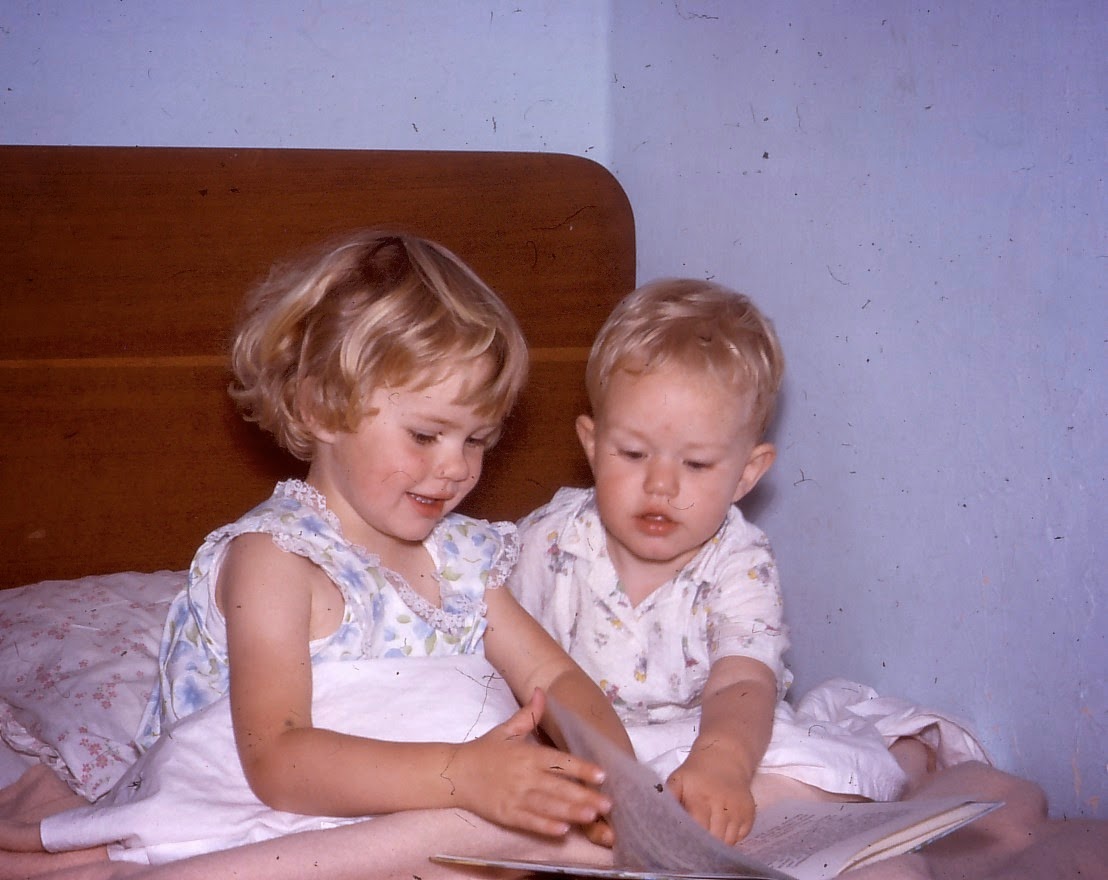 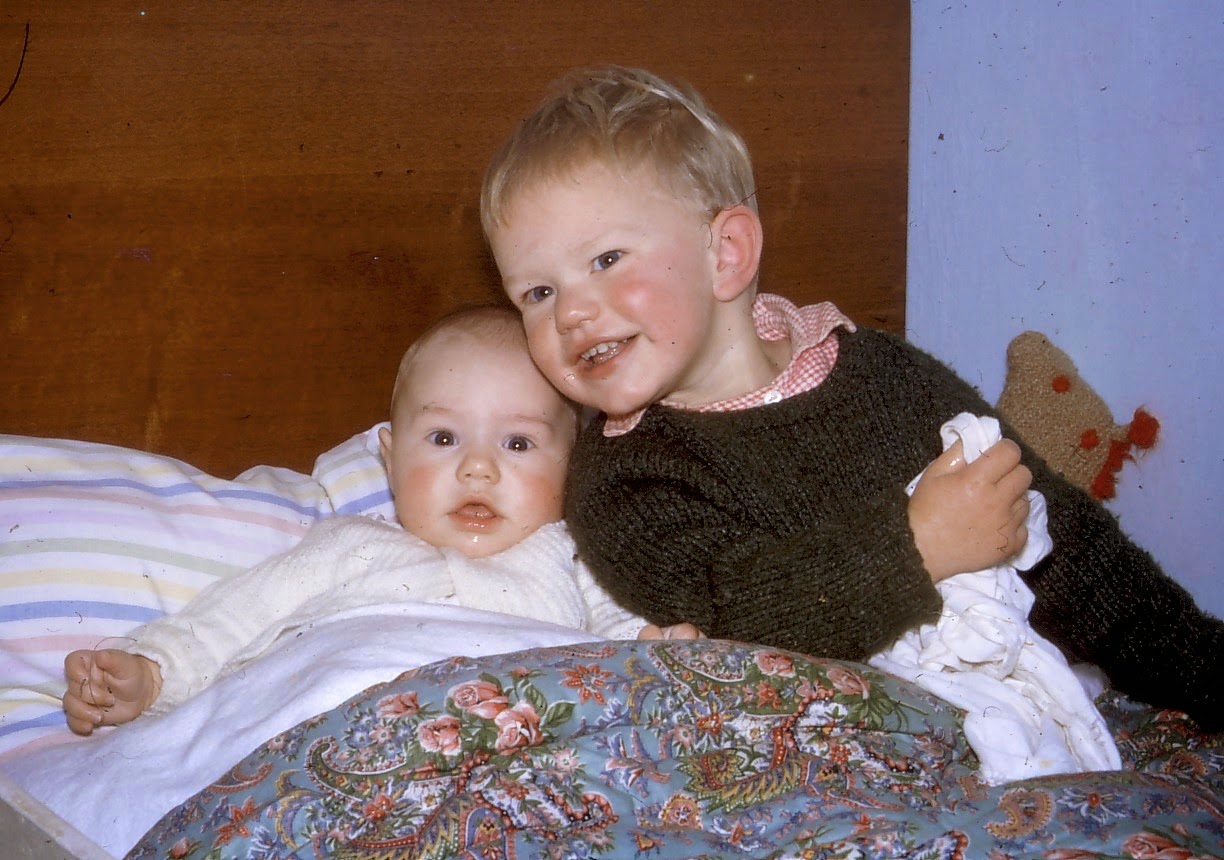 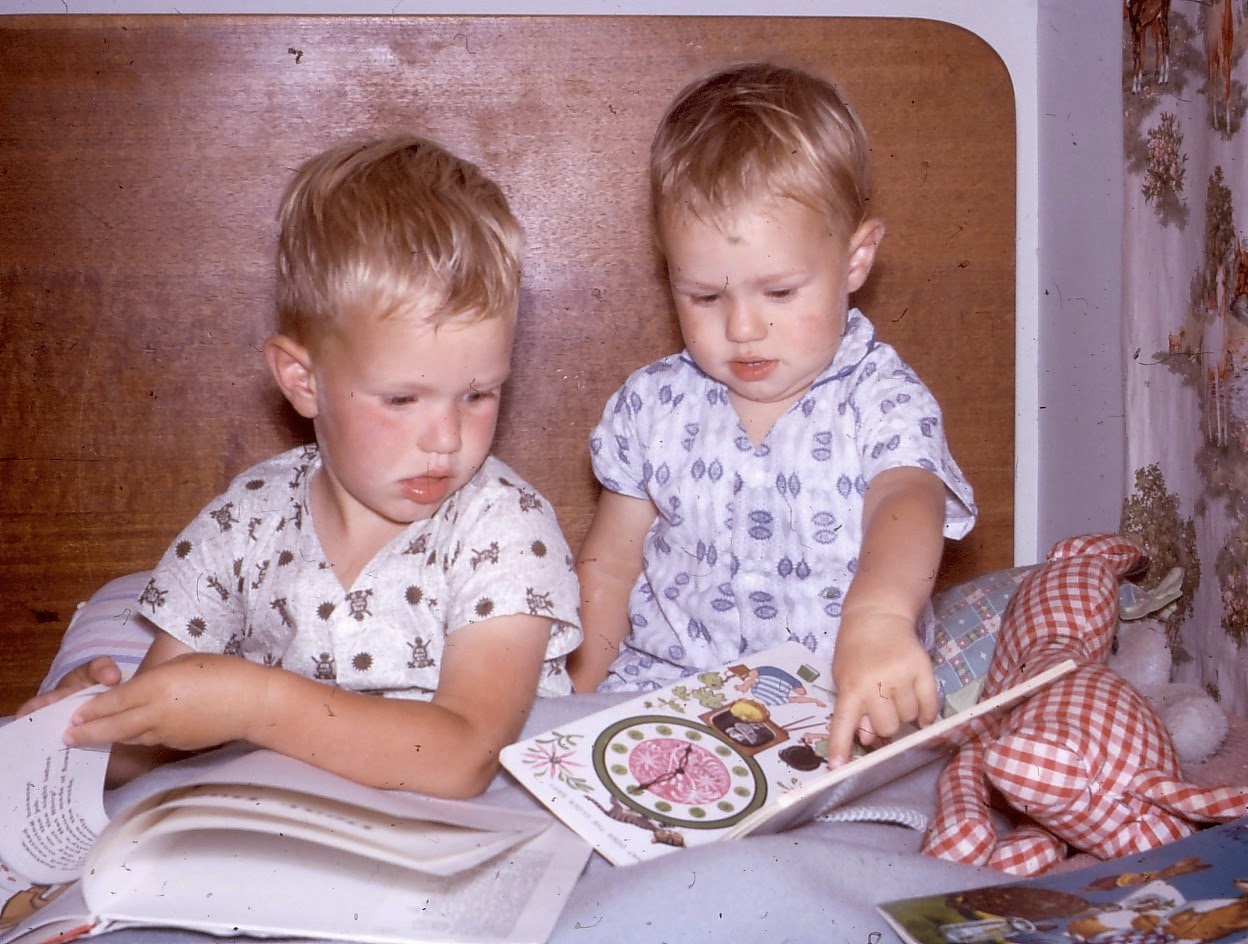 This week’s Sepia Saturday photo prompt is of a lady filling a sandbag - and a little boy in a sailor suit. 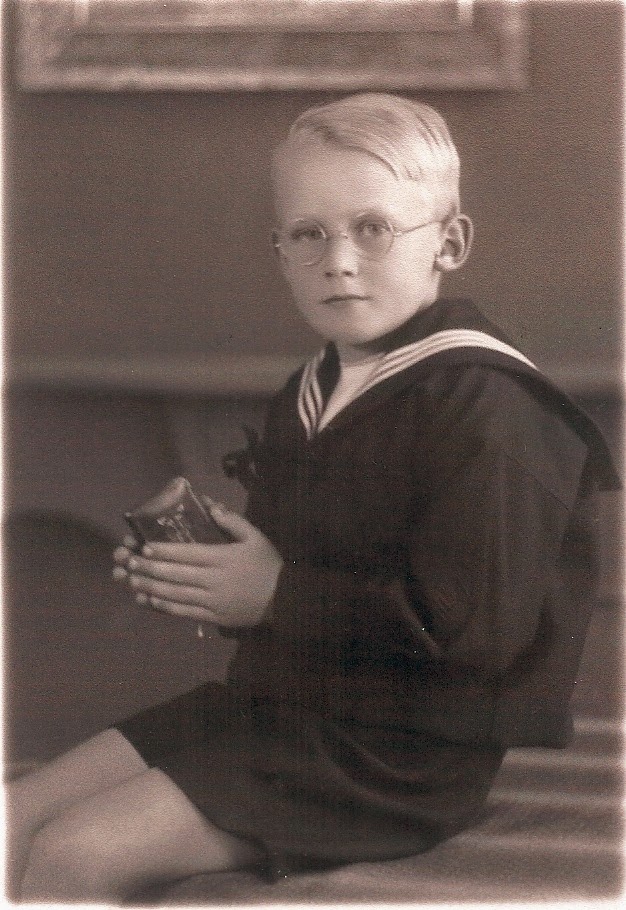 Straight away it reminded me of a photo of my father-in-law Arno van Bergen taken in Limburg, Netherlands around 1930 and wearing a ‘sailor suit’, and so a good prompt to begin writing his fascinating story.

Arno was born Johannes Arnoldus van Bergen in 1925 in Maastricht to carpenter Johannes Jacobus van Bergen (b1895) and tobacconist Maria Elisabeth Hardy (1898-1993). Many generations of both sides of his family had lived in Limburg, with his mothers family going as far back as I could trace - all from Maastricht.

The innocent looking boy in the photo knew nothing of what was to become of him as war broke out in his country by the turn of the decade. He had a very strict Catholic upbringing so he is almost certainly not wearing a sailor suit at all – it is probably a choir or altar boy’s outfit, and he is likely to be holding a bible or prayer book in his hands.

He was a mischievous boy who loved to run and play soccer. He was very good at maths. By 1940 he had probably finished school, or was in his last year.
A month after his 15th birthday, on 10 May 1940, German troops invaded the Netherlands. The inexperienced Dutch Army held out for four days until the Germans bombed Rotterdam and 800 people were killed. The Royal family and the government went into exile in England. Anyone in a government position who stepped down was replaced by a member of the NSB, the Dutch Nazi Party. Some government officials tried to stay on to protect the Dutch people from things like conscription into the German army. Some newspapers and radio stations were banned or shut down in an attempt to control.
Before he turned 16 years old, the first ‘roundups’ of Jews occurred, on 22 Feb 1941 and this shocked the Dutch so much the illegal Dutch Communist Party called for a national strike (and marches) three days later. It started in Amsterdam and spread to outlying towns. The Germans were caught by surprise and reacted by shooting at groups of strikers. The strikes didn’t prevent further persecution of the Jews but it did strengthen the disgust for National Socialism in the Netherlands.
In 1941 every Dutch citizen over 14 years (so including Arno) had to carry an identity card. Propaganda was increased, with an overwhelming amount of cinema newsreels, pamphlets, brochures and posters. Aversion to Jews was stirred up.
The Netherlands had pride in their educational system, with different religious groups having separate schools. The Germans had trouble gaining influence in the schools apart from giving preference to NSB teachers, banning school books and increasing the hours of German study. Pupils and teachers were fiercely anti-German so jokes and songs circulated.
Many more people became church-goers as protests were preached from the pulpit and clergymen urged their congregations to help those in hiding.
Catholic and Christian trade unions came under National Socialist leadership in 1941 and when the churches urged members to cancel their membership, 95% took their advice.
The standard of living dropped, imports were impossible and many goods were transported into Germany. There were long queues at shops, petrol became scarce and bicycle tyres were replaced with wooden ones.

Just after he turned 17, at the end of April 1942, all Jews were required to wear a Star of David, and deportations began in that summer. About 80% of the Dutch Jewish population was murdered in the extermination camps.

As Arno turned 18, the Germans decided they needed labour forces and announced 300,000 Dutch soldiers would be transported to Germany. Spontaneous strikes broke out and spread across the country. Known later as the ‘milk strikes’ because they were mainly in country areas where farmers refused to deliver milk to the factories. The German occupiers responded, executing strikers and shooting at groups of strikers. They insisted on all radios being handed in, resulting in many being hidden.
In May 1943, all men between the ages of 18 and 35 had to report for forced labour – this included Arno, aged 18 years and one month – bad timing!

About 140,000 Dutch citizens were taken to Germany and forced to work very long hours in factories that were Allied bombing targets. There were promises of good meals, cigarettes and payment, that in reality didn’t eventuate.
About 120,000 more were used to dig trenches and build fortifications in northeastern Holland – “soldiers without guns”. Arno was one of these - moved from his home in Maastricht, Limburg over 200 kilometres to the area around Lochem, Gelderland.

Many of those in forced labour died or suffered long term physical and/or psychological effects. Many tried to go into hiding but this was difficult as they had no money or ration coupons, and they were fearful of what would happen to their family.

This move was in one sense a good thing for Arno as it is how he met his future wife, and mother of my husband.

This post is long enough – I’ll talk to my mother in law and write more later – including how Arno escaped!

Ever since the wonderful genlias website was ‘taken over’ by Wiewaswie, the ability to search (and read) Dutch records in English disappeared.

I was able to fill in lots of gaps in my husband’s family with genlias. It wasn’t completely in English but with the help of my mother in law and google translate, I was able to get lots of answers.

I’ve just seen on a blog from January this year that the new website is now in English! I can’t believe it’s taken me so long to notice.

I guess that’s what comes from bookmarking favourite websites and just clicking on them.

So now, a whole new (Dutch) world has opened up.

The WieWasWie (translates to WhoWasWho) database includes civil register records, church records, passenger lists of the Dutch East India Company and - for now - rarely memoranda of succession. Apart from these historical records, you can search user generated content, family trees and biographies by other users.

There’s even a video to help you use the site – produced by familysearch as part of their FamilySearch Learning Centre. 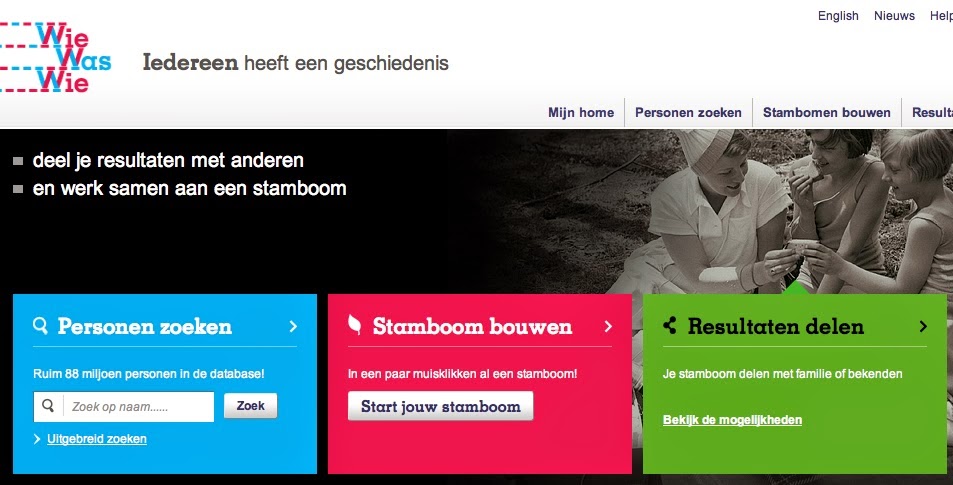 Posted by Jackie van Bergen at 21:09 No comments:

Sepia Saturday – It’s OK to play games at the table

This week’s Sepia Saturday photo prompt is of two little girls playing games and an outdoor table.
I couldn't resist despite being swamped with proofreading for our Society's WWI book. 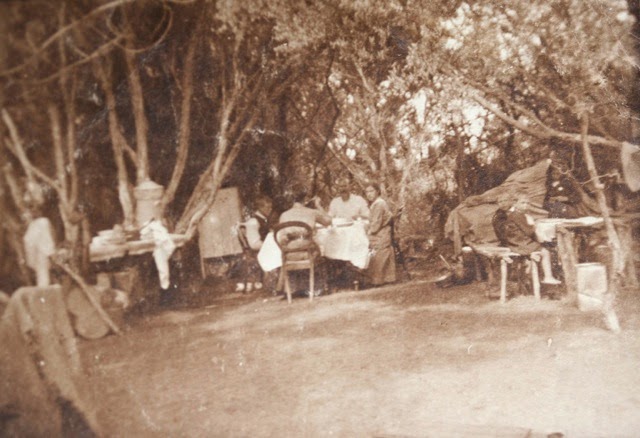 Among the large number of photos I scanned last time Mum and Dad visited there are a good number of kids (and some ‘grown ups’) having fun around tables. Who said you couldn’t have fun at the table?

The first: My great grandfather with his step children at the main table, and his children at the side table. My grandfather and his brother were close in age and had similar mischievous personalities as men, so I’m sure they were a handful as youngsters. This was taken around 1910 at Black Rock where they had a ‘weekender’, a little beach shack. 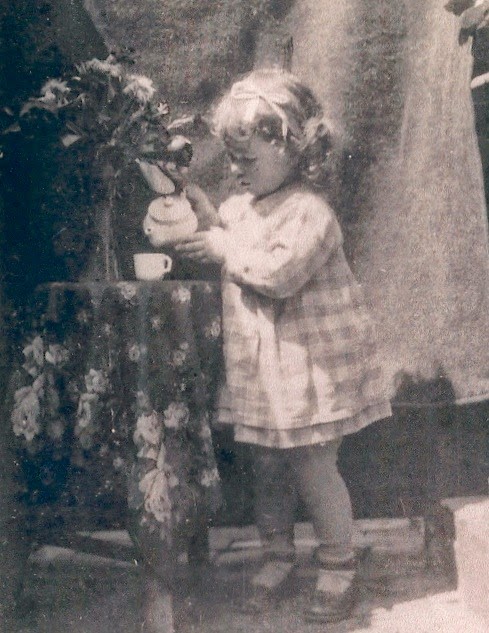 My mother in law pouring a cup of tea in the late 1920s – or maybe coffee as this was in the Netherlands. She lived in Lochem, Gelderland. 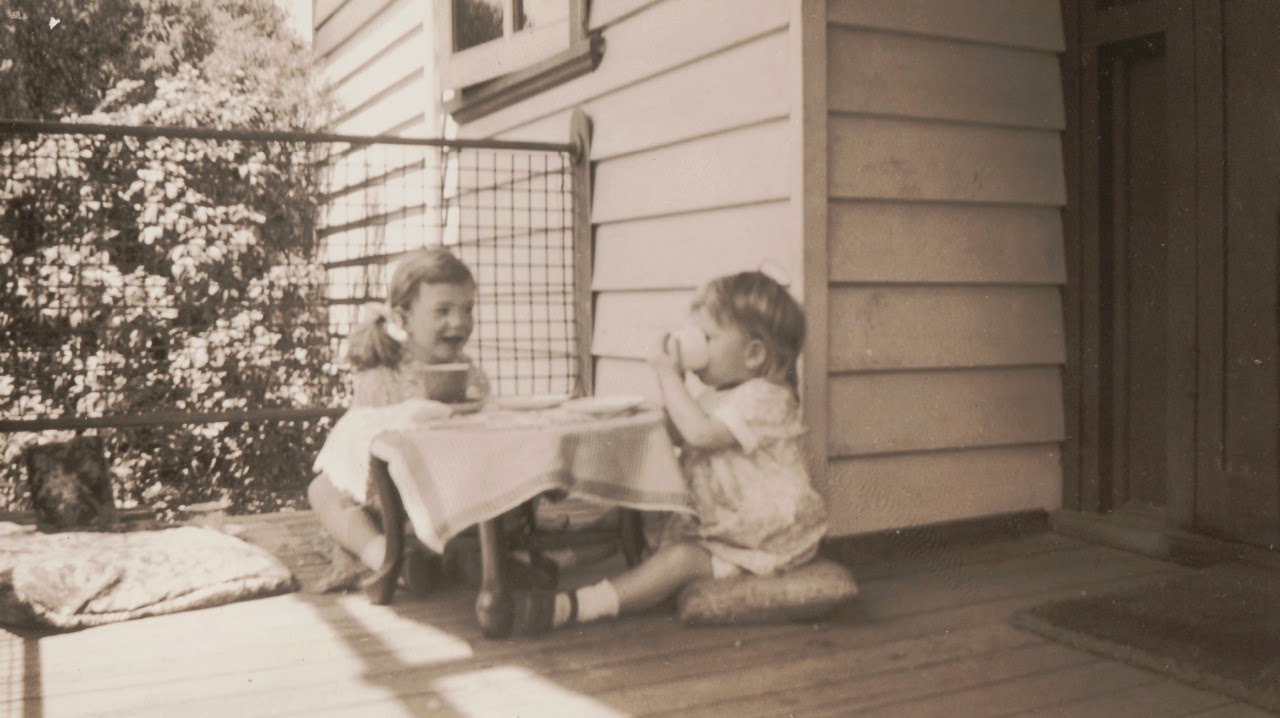 My mum and her sister having a tea party, 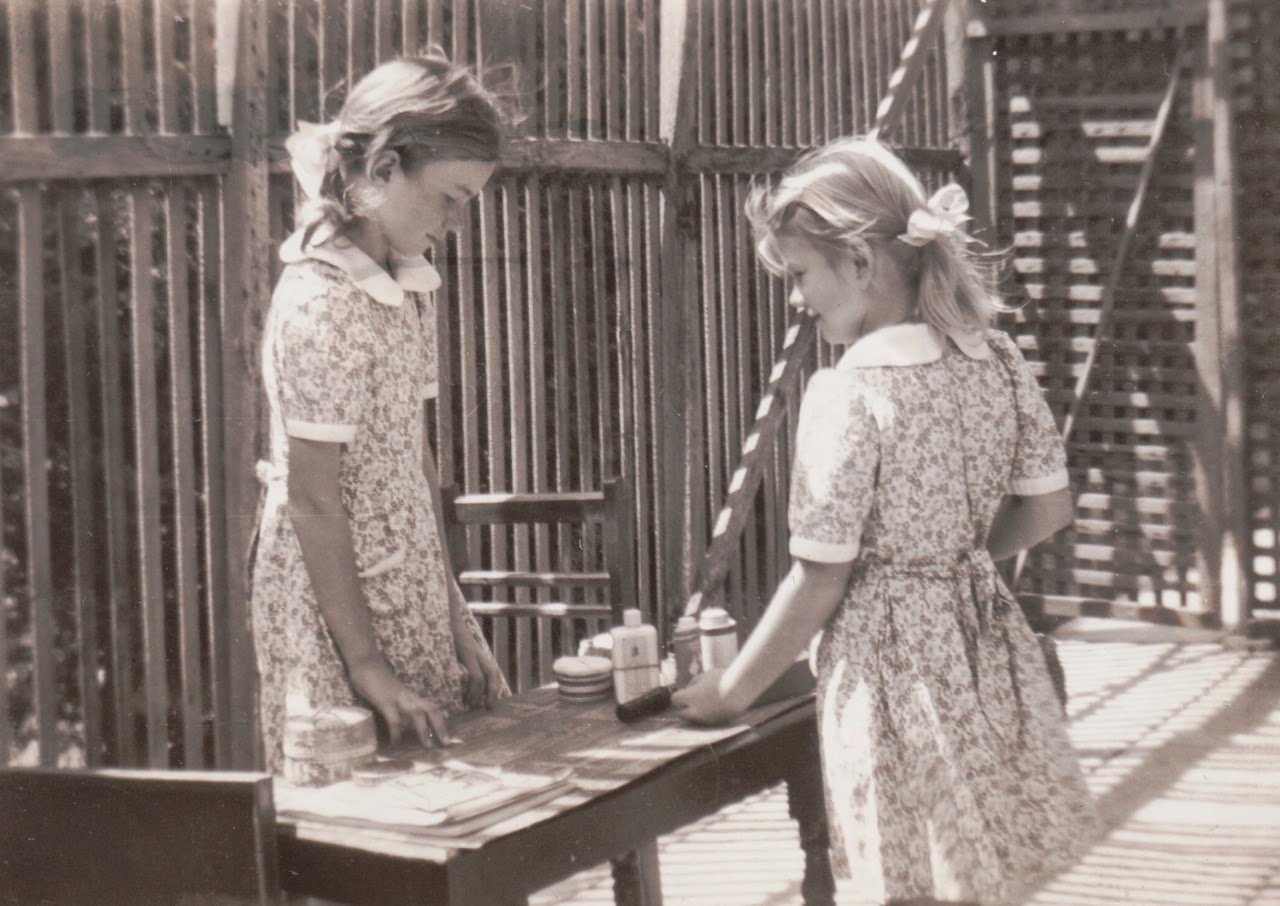 and then a bit older playing ‘shops’. 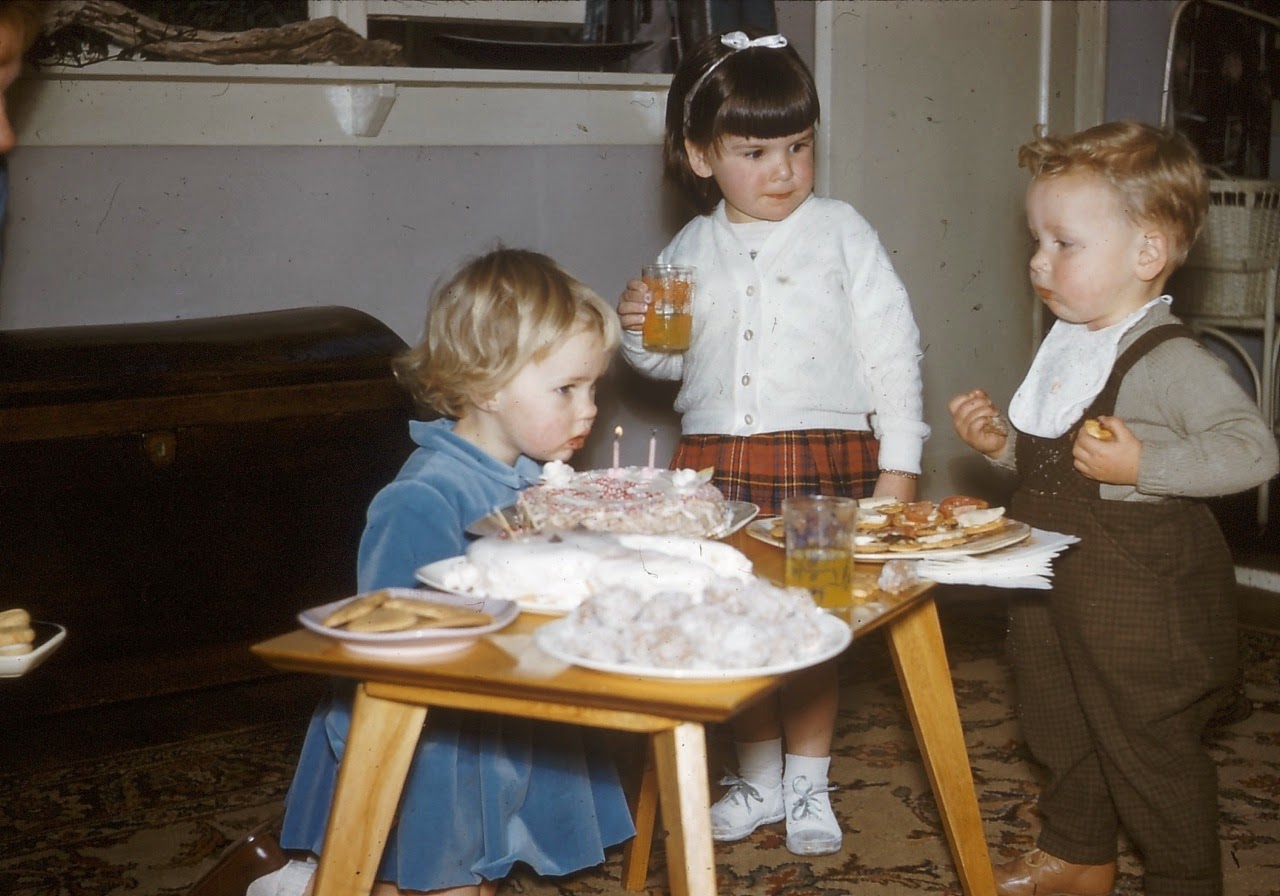 Then my 2nd birthday party with a couple of neighbours. 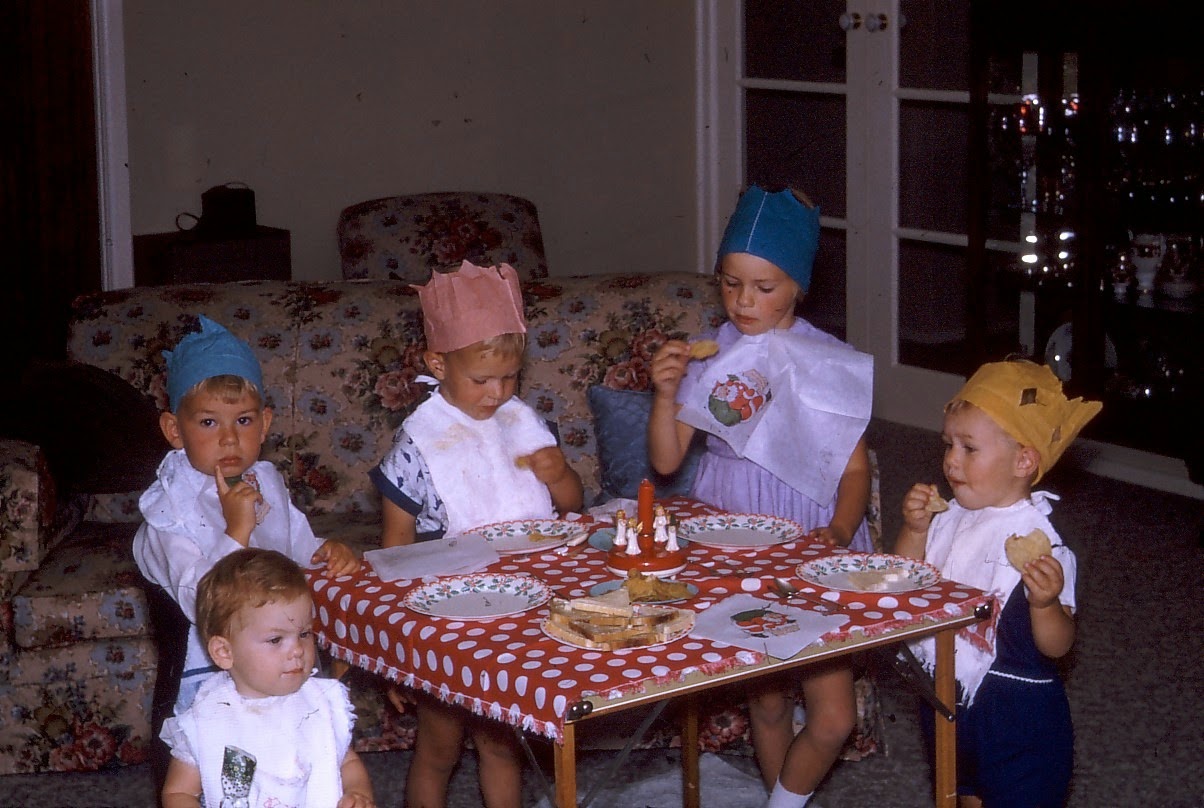 A Christmas party in my grandparents’ lounge room, with my brothers and cousins, the children of Mum’s sister - and of course - silly hats! 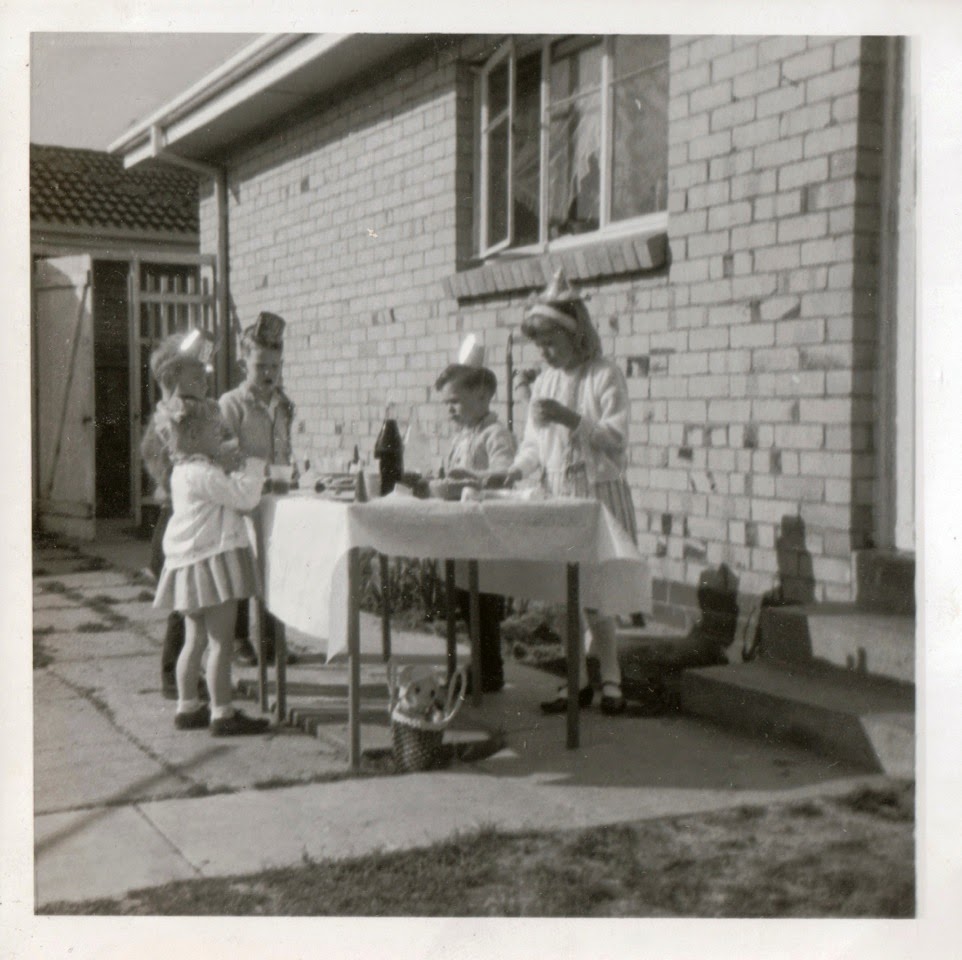 My brother’s 5th birthday party around a table in the backyard with the same cousins who at that time lived next door - and more silly hats! 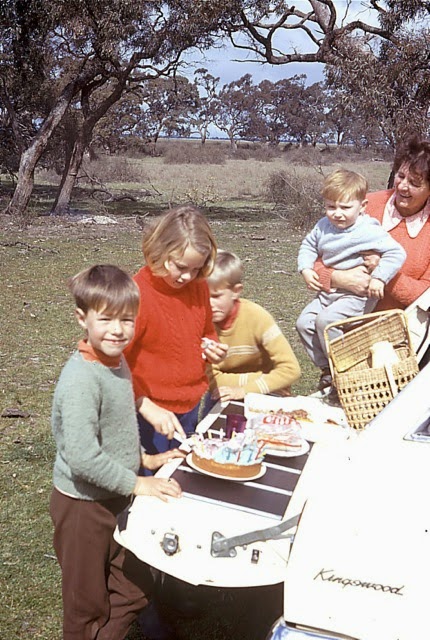 Now living in the Wimmera, the back of the Kingswood station wagon became the table, this time probably in the Darlot swamp near Longerenong where we lived. I’m guessing this is my 10th and my brother’s 8th birthdays because there are two cakes – our birthdays are two days apart. My grandmother is also in this photo, holding her newest grandchild.

And the last:
Same clothes, different table, different cousin (my favourite ‘big’ cousin – really Dad’s cousin but only 3½ years older than me), and a special guest seeking food – a kookaburra. This one was probably taken at Zumsteins in the Grampians (Victoria, Australia). 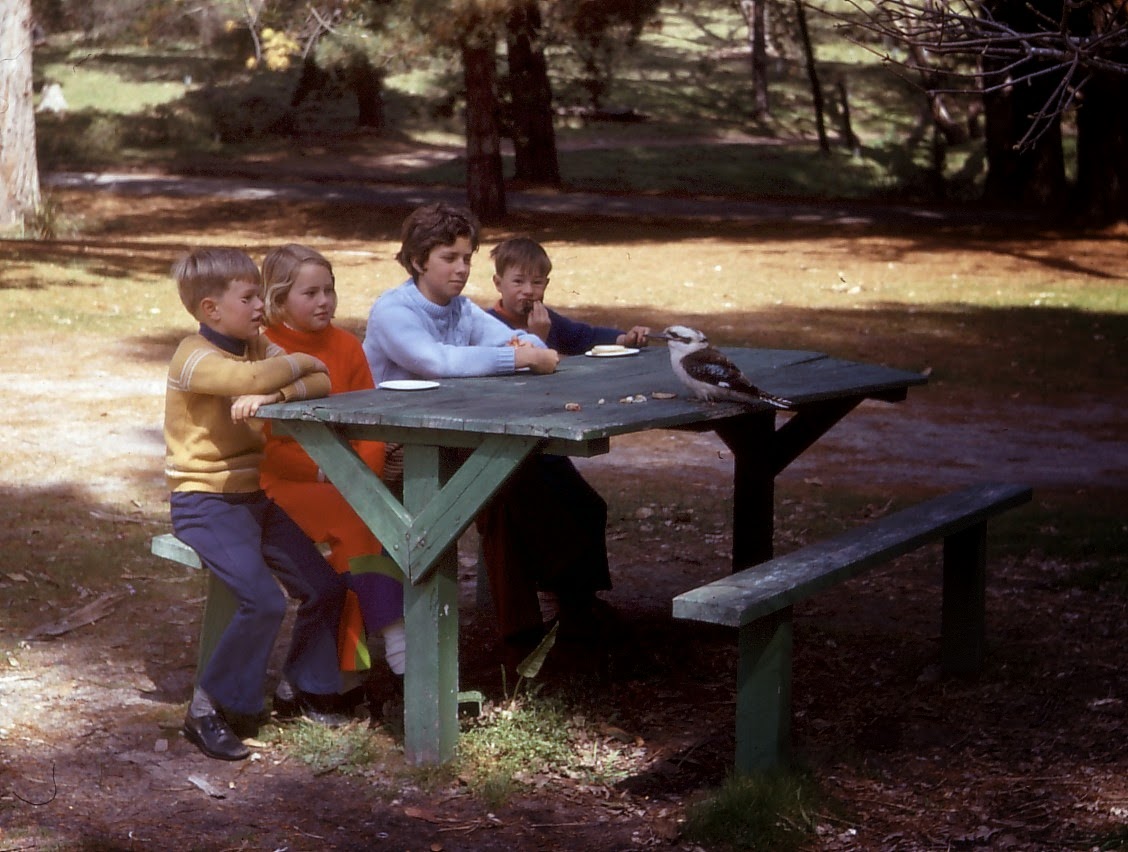 This week’s Sepia Saturday prompt is a photo of five ladies taking part in what is described as a 'Greek Cymball Dance’ at a Sufragette Ball. It is suggested we may wish to hang on to that description as a possible avenue to explore if inspiration deserts you. Otherwise we have May Day, dancing, folk traditions or very silly poses; take your pick or forget about themes altogether.

I couldn’t come up with anything related to this but do have a photo of four lovely ladies posing for the camera.
My mother is the bride.
She made her own dress and those of her bridesmaids.
Mum and Dad will celebrate their 55th wedding anniversary this year.

I’ve been very distracted from my blog lately.
I’m working as part of a team in our local historical society to publish three books of biographies of local WWI soldiers. We are in the final proof reading stage of Volume 1. 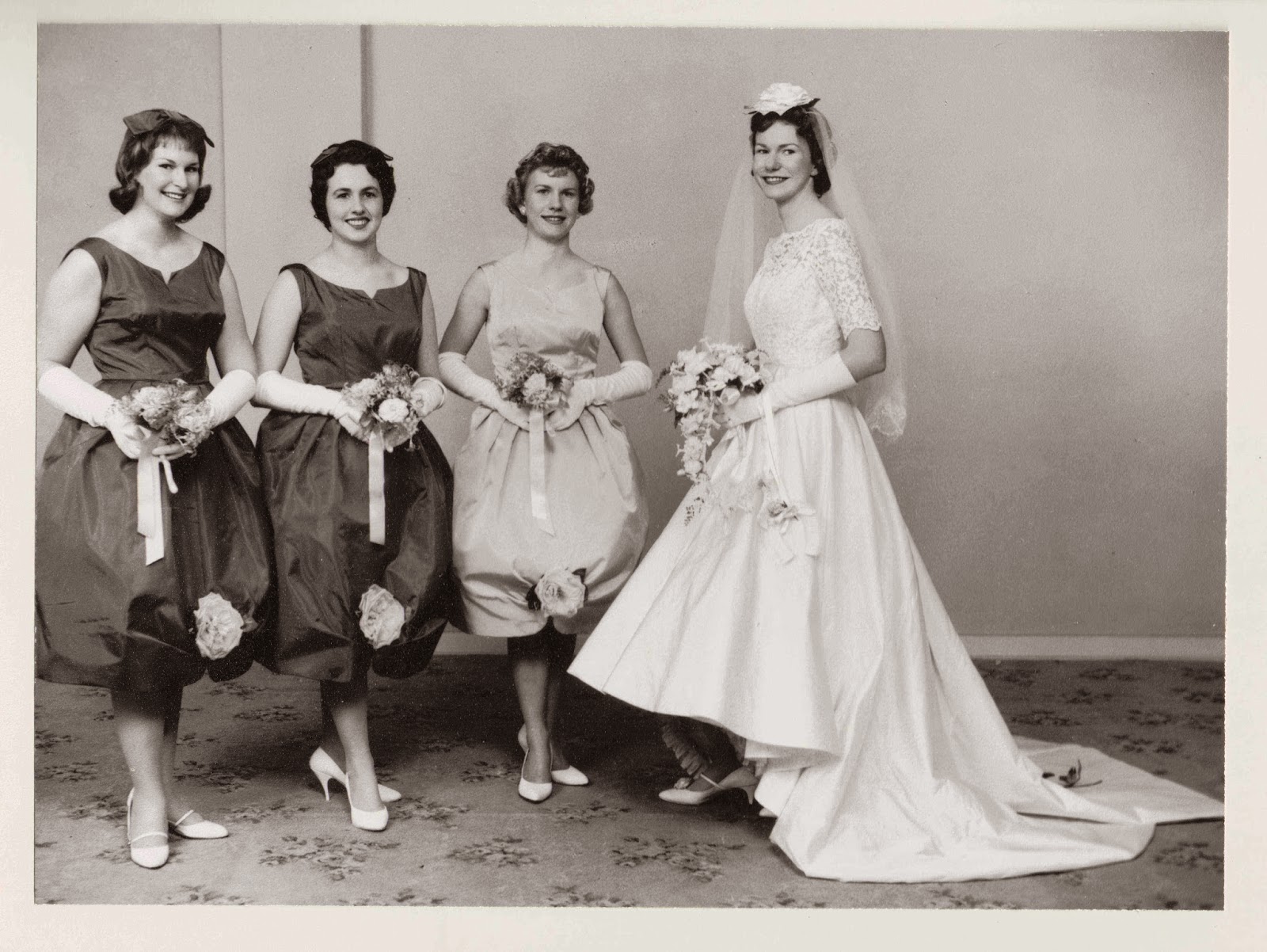