The Sepia Saturday prompt for this week shows a barge crossing a flooded river or lake.

I didn’t have any flood photos in my massive sepia collection, so turned to Trove, the wonderful National Library of Australia search engine.

I found a large number of articles and some great photos of the 1934 flood that filled the open cut brown coal mine at Yallourn in Victoria’s Gippsland.

The first three photos are from the JP Campbell collection of glass negatives documenting industrial enterprise at Yallourn, ca 1920-1940 (and held by the State Library of Victoria).

On 1 Dec 1934, flood waters burst the banks of the Latrobe River and 65 million gallons poured into the vast open cut mine at Yallourn.

The coal, dredgers, and other equipment (valued at more than £500,000) were all submerged and this left Victoria with electricity for only a week.

The plant supplying drinking water to the town was also under water, creating further problems.

A special train had to be chartered to bring milk, bread and meat to the town as all roads were cut.

The rains that caused the floods were unprecedented and broke the 71 year records held by the Weather Bureau – in three days, the Gippsland region had around 1100 points (about 11 inches, or around 280mm).

This was followed closely by another flood at Easter 1935.
But this time, the emergency levees quickly built after the Dec 1934 floods were able to prevent further flooding in the open cut.
Pumping was still proceeding following the 1934 floods – by February, the open cut still contained 3.65 million gallons.
The pumps were set up on pontoons and drew off 1 million gallons an hour.

This all happened just before my newly-married grandparents moved to Yallourn. My grandfather, Keith Leo GRENFELL (1911-1944) was an electrical engineer (on his marriage certificate) and a mechanic / fitter (on the electoral rolls).
I’ve written a little about him before.

You can read some personal accounts of the floods on the wonderful Virtual Yallourn website – brought to my attention by another regular Sepia Saturday blogger, Sharon of Strong Foundations.

A bit late this week due to a big birthday in the family and a trip interstate to all get together and celebrate it.
The Sepia Saturday prompt this week is a statue. I can only think of one statue linked to my family: 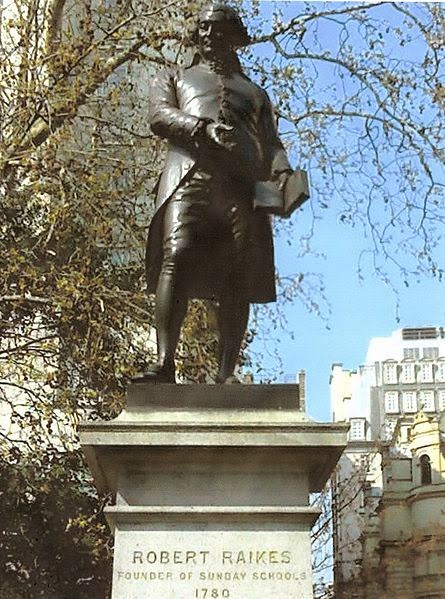 In 1880, a statue of him was erected on the Victoria Embankment (between the River Thames and the Savoy Hotel, London) to celebrate the centenary of the Sunday School movement. There is a copy of the statue in Gloucester and I think another in Canada.

Robert Raikes inherited the business of the Gloucester Journal from his father but is best known for establishing the Sunday School Movement.

We grew up with stories from our grandfather John Raikes GARRETT (1908-1992) about all this.
Pa was quite a storyteller so we didn’t really believe him, especially as he never seemed to go to church himself.
Much later when I started my family history research, I learned that this story was true.

Robert Raikes started school on Sundays when he realised that crime was connected to lack of education. He opened the first school in 1780 with the aim of providing (initially) boys with the chance to learn to read when most of those from lower social classes worked six days a week. He used his own paper, the Gloucester Journal to promote the idea, and just 20 years after his death (in 1811) about 1.25 million boys and girls were regularly attending school on Sunday.

Robert had married Anne TRIGGE in 1767 and they had 10 children, (two dying by the age of two). My 4x great grandmother Mary RAIKES (1773-1812) was the second daughter to survive infancy.

Mary Raikes married Henry GARRETT (1774-1846) who went on to become Vice Admiral of the White. They also had 10 children who all survived childhood.
My 3x great grandfather, John Thomas GARRETT (1802-1852) was their second son. I have written about him and the family before, here.
It was John’s son, Henry Raikes GARRETT (1838-1876) who came to Australia in 1858.

In a continuation of my blog yesterday, trying to find out more about John Williams, father of John Brooks / Brookes, ancestor of my new cousin Barry, I turned to Trove. 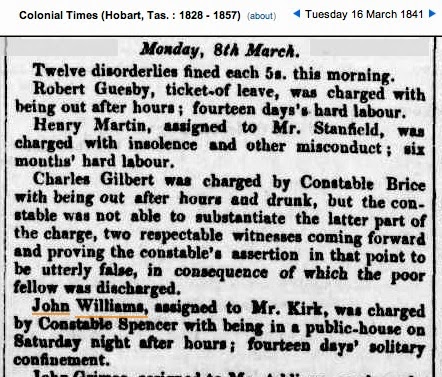 But, narrowing down year and state by using filters helped a bit.

I wonder if these articles could be referring to ‘my’ John Williams.
It would sort of make sense if he had been convicted and jailed for something and that is why he was out of Jane’s life.

Both these offences occurred in 1841, the year young John was born. 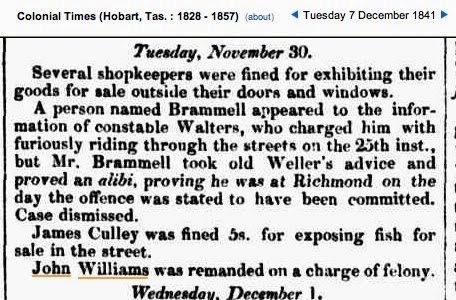 I also think maybe Jane and John weren’t married.
When Jane and Thomas Brook/Brooke/Brookes were to be married, they had to complete an Application to Marry (a convict).
On this, Jane listed herself as Jane Cundell, not as Jane Williams. This was 21 September 1843.
Their daughter Mary Anne was born in July the following year, 1844. 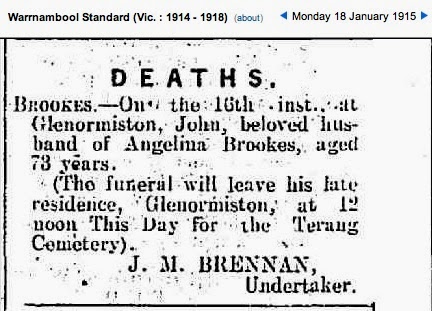 After the marriage of Jane and Thomas, young John was raised as John BROOKS / BROOKES.

I have not been able to find any further mention of ‘the’ John Williams.
It’s a difficult name to search – being so common, and with the surname closely approximating a first name too.

After Thomas’ conditional pardon in 1845, he moved to Mt Shadwell, near Mortlake in Victoria’s Western District.
Jane and the children followed after the birth of my great great grandmother Frances Eliza BROOKS in 1846.

Vida May, born 1898 in Terang, and married first Stanley BAXTER, then Percy BENNETT.

John Brooks died in Noorat on 16 January 1915 age 73 years and was buried in Terang cemetery.

I've previously written about Jane and her family here, and here.
Posted by Jackie van Bergen at 16:48 1 comment:

This week’s Sepia Saturday prompt photo is from a series of images showing the areas in Sydney affected by the outbreak of bubonic plague in 1900.
The suggestion is fences, backyards and bubonic plague.

I have fences, a big backyard and a polio epidemic.

Most of those affected were children under the age of 14.

My parents remember a little about these epidemics.

During one of these epidemics, my Mum’s parents sent her and her little sister to her grandparents farm in the Western District of Victoria for a month or so.
Mum thinks her mother was with them for most if not all of this time.

She can remember helping around the farm, feeding turkeys and lambs, and also having picnics.
Mum said they went for a very long time but it may have only been a month – everything seems longer when you are a kid!

My Dad was still living in country Victoria, in Yallourn at the time of the 1947-48 epidemic.
He thinks they were probably a bit isolated down there so wasn’t aware of much.

Both of my parents were living in Melbourne at the time of the 1951-52 epidemic.
They can remember, “kids just disappeared from school, never to be seen again”.
Dad says he remembers friends (young people) in iron lungs.

They then reminded me of the fuss I made when taken to get my polio vaccine. Seems I was a source of amusement for my brothers!
Time to stop the questions :)

Sepia Saturday – A Family on the Rocks 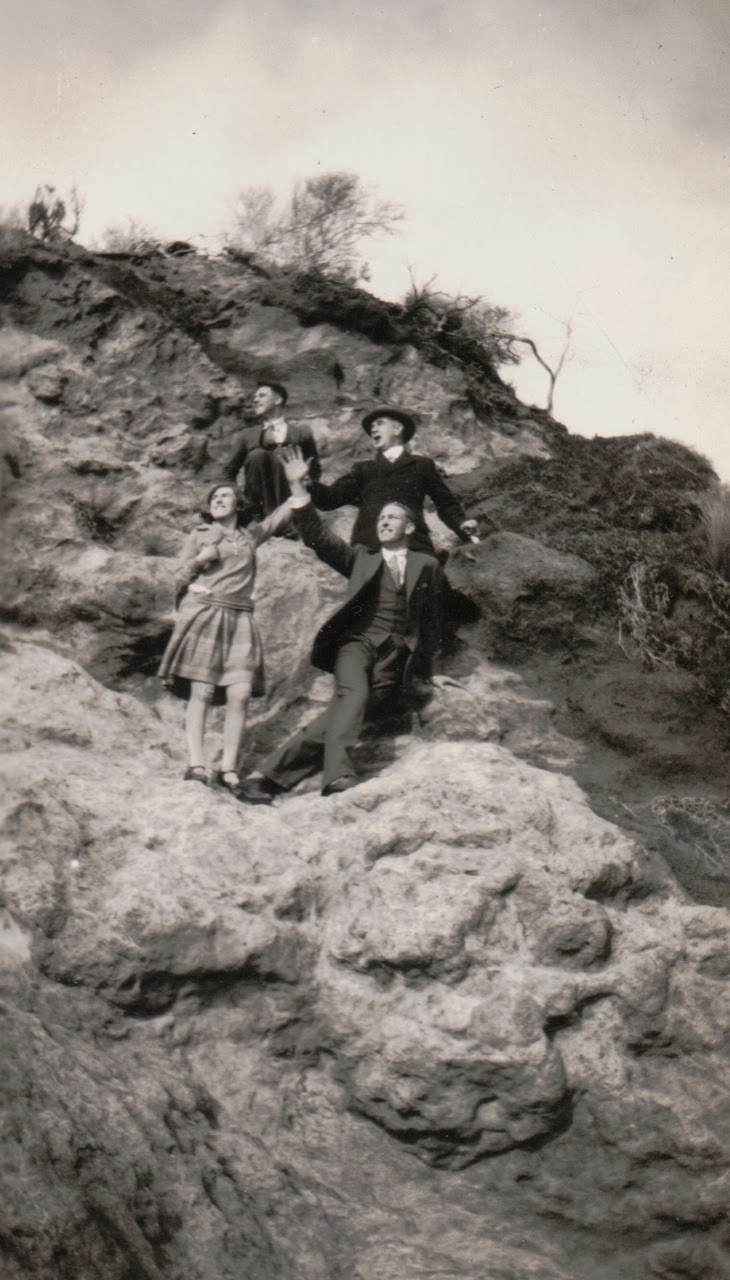 This week’s Sepia Saturday photo prompt is a photo of three men on rocks with a telescope.

When I saw this it reminded me of two sets of photos in my collection – so this is the second two blogs I’ve done for this prompt.

The first blog was a day or two ago, and was of my Nanna and her family (and dog) in their ‘back paddock’.

This one is of my Pa and his family.

Strangely both these sets of quite similar photos were taken well before they met and married!

Sometimes he would go by car with his father, brother and sisters, and other times on his motorbike. 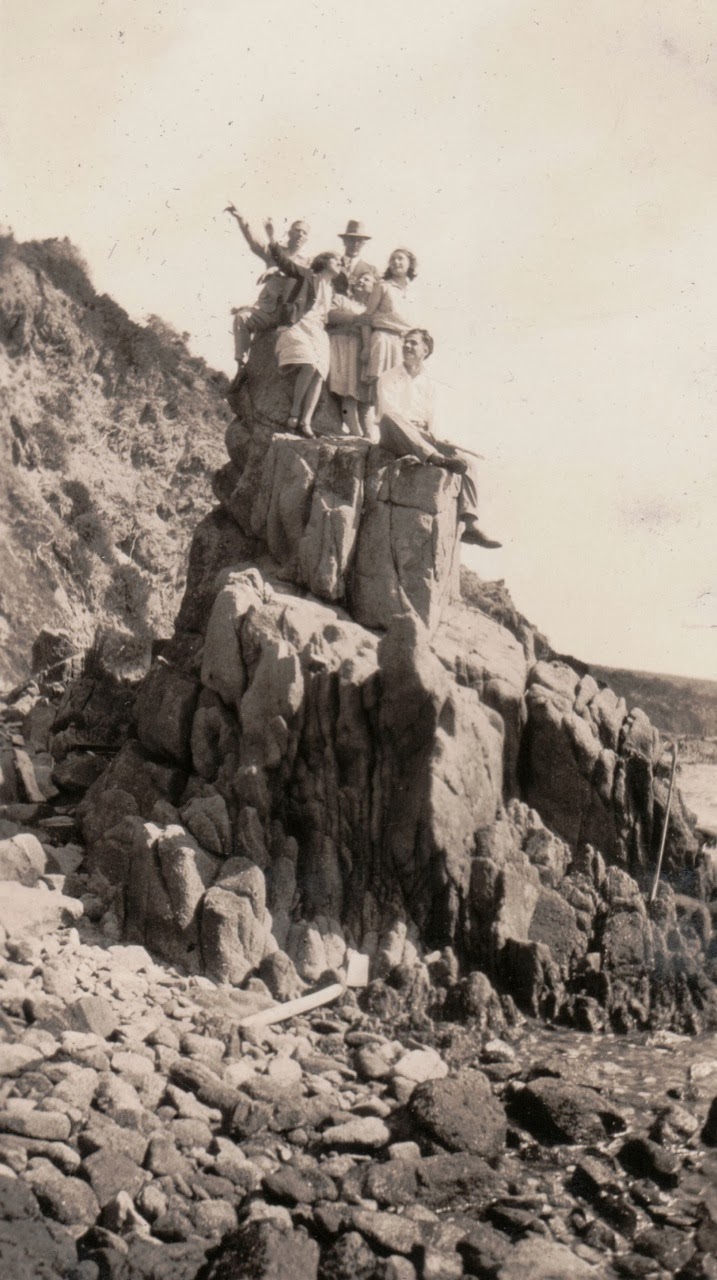 They certainly look like they were having some fun clowning around and striking poses on the rocks – but again, look at the clothes – men in three piece suits and ties, ladies in court shoes...

Pa also told Mum he used to ride his motorbike out past the property where his future wife lived, not knowing her at the time.

Most of these photos are taken on rocks by the beach but I wonder whether some of these photos were taken in a different part of the same Stony Rises that my Nanna and her family also posed in. 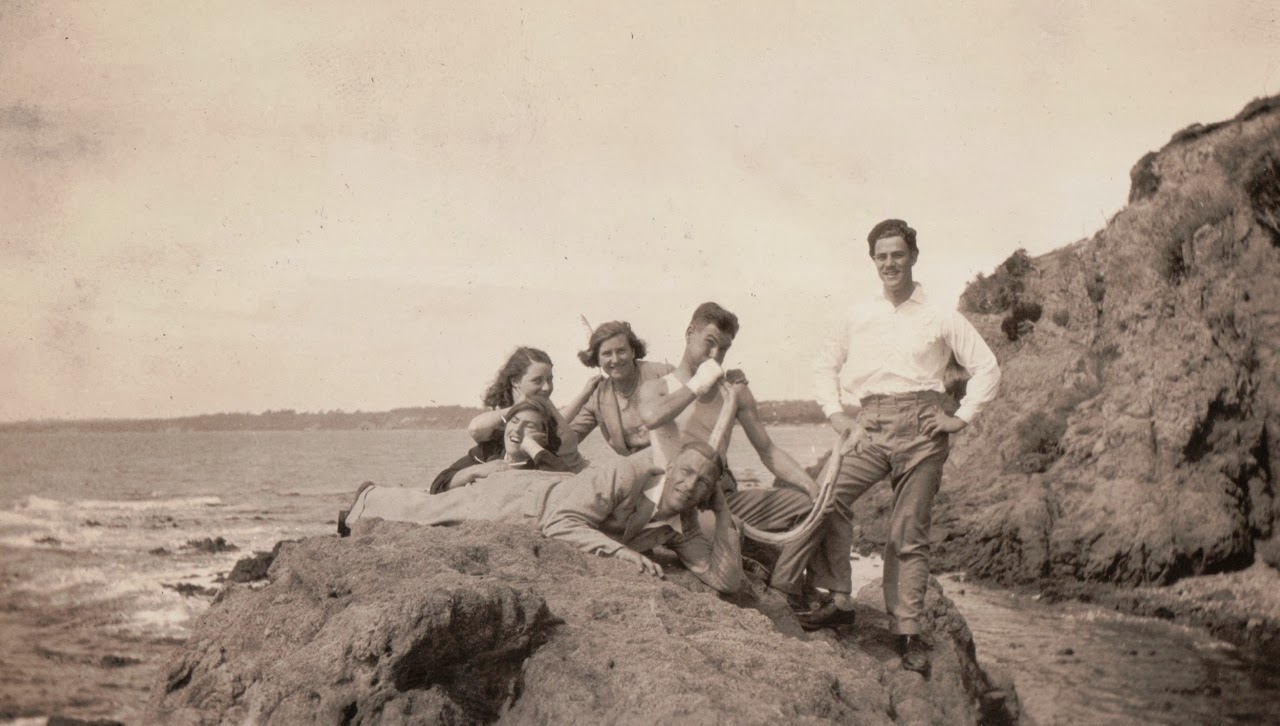 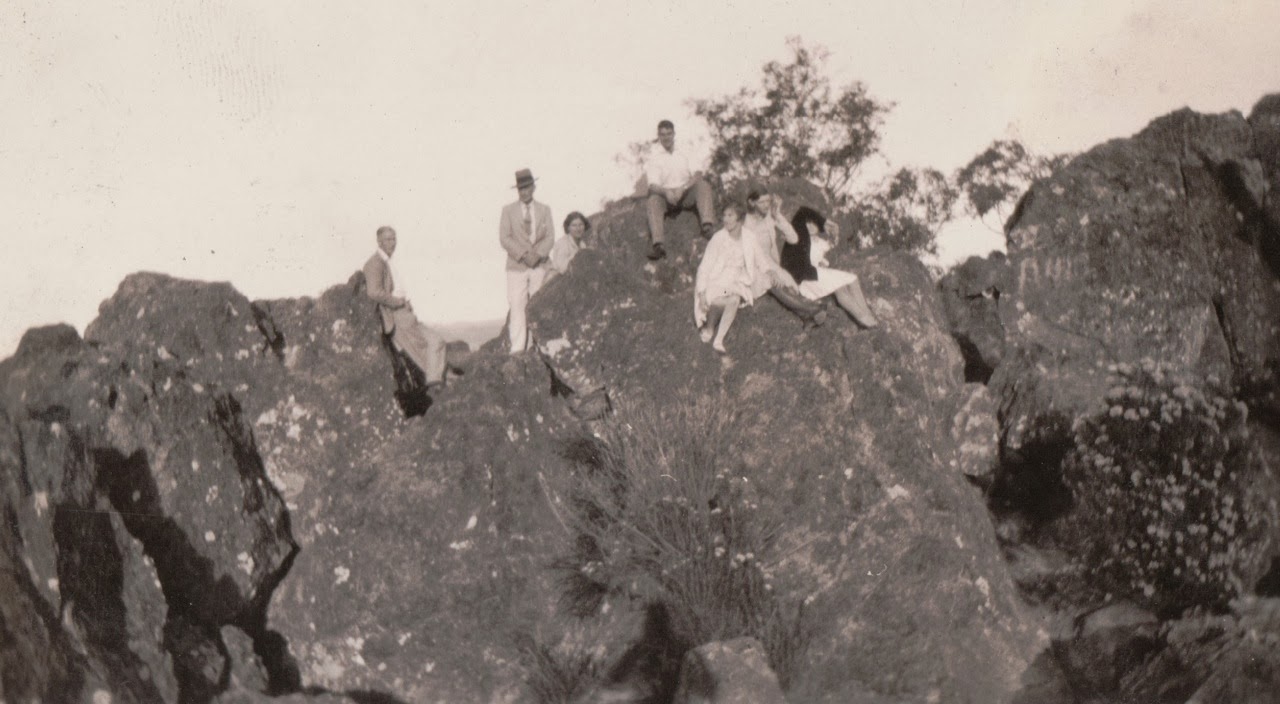