This has been a big week (and a bit) in Sydney with the International Fleet Review here to commemorate the centenary of the first entry of the Royal Australian Navy’s fleet into Sydney in October 1913.
So, when I saw the Sepia Saturday prompt for this week was the launch of a battleship, I thought it appropriate to write about my grandfather’s brother and his time in the Navy. 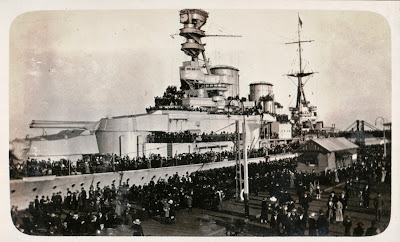 My grandfather was only 4½ years old, so would hardly have got to know his big brother.

About the time the first RAN fleet was sailing into Sydney, Rue was promoted to Boy 1st Class.

In June 1914, still a Boy 1st Class, he was transferred to one of the RAN ships, the Australia.

In January 1915, there were rumours that the HMAS Australia had met with disaster – such a worry for his mother at home with little children, and her son onboard the Australia only 17 years old and not officially old enough to go to war.

There are reports in the newspapers refuting these rumours and assuring everyone that those on the Australia were well and “doing excellent work in upholding the Empire’s position on the seas.”

Rue moved up through the ranks, from Boy, to Ordinary Seaman, to Telegraphist, to Leading Telegraphist.

He must have met her in 1917 (if not before) as his brother (Eric/Ricky) wrote in his WWI diary in August 1917 that he had taken the Midland train for Birmingham where he was met by Rue and Alice, and stayed at Mr Dineley’s that night.

It must have been good for the brothers to meet up so far away from home in the middle of the war. 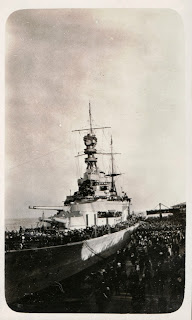 He was invalided out in March 1921 at the age of 23 years.
The only thing I can find related to injury in his file is that the top of his left mid finger was damaged. He was discharged in August 1922.

His file says that on his ‘advancement to Man’s rating’, he had grown to 5 foot 7½ and had had his appendix out, and had a tattoo on each forearm.
I don’t remember ever seeing his tattoos.

A couple of weeks ago, in Canberra, I met a grandson of Rupert (my second cousin) for the first time – but that’s a story for another time. 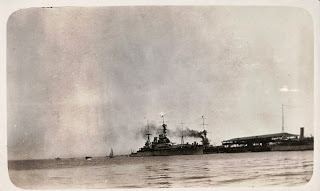