Just three days after her ninth birthday, Louisa was travelling first class with her mother and six siblings on the famed Schomberg, on a voyage that was expected to break all speed records for the England-Australia run. Just after Christmas 1855, the ship ran aground near Curdies Inlet on the west coast of Victoria. Thanks to some of the crew, and people on the beach picnicking, they were all rescued although most of their belongings were lost.

Her father, Robert LEWIS (1808-1871) and older half-brother had emigrated a couple of years earlier. Her father was a licensed victualler and licensee of a number of hotels in Melbourne’s CBD, including the Royal Railway Hotel in Elizabeth St (1860-1) and the Mechanics Arms Hotel in Little Collins St (1866). 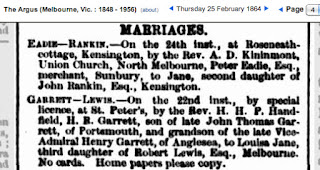 Louisa married Henry Raikes GARRETT (1838-1876) in St Peter’s Church, Melbourne on 22 Feb 1864, by special licence as she was only 18 years old. Henry was seven years her senior and worked as a wine and spirit merchant.

I wonder how much she and her family knew of Henry’s past. As with most families, we only knew of the good parts – son of a successful brewer in Portsmouth, grandson of a Vice Admiral (both deceased before this marriage).
But, Henry until recently (via Trove) had an unknown, shadier side. In 1861 in Adelaide, he had been charged with forgery with intent to defraud. He had ‘escaped’ to Melbourne and had had to be brought back to Adelaide to face the charges in court. He was remanded for a week. 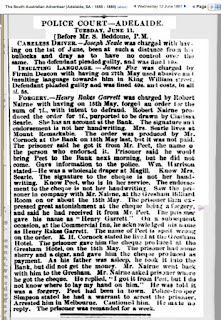 She travelled back to England with her husband and son, leaving in Mar 1865 on the James Wishart, and returning in Sep 1866 on the Suffolk. Then just a month later, she gave birth to her second child, a daughter Mary Louisa GARRETT (1867-1942).

And all this before her 21st birthday! 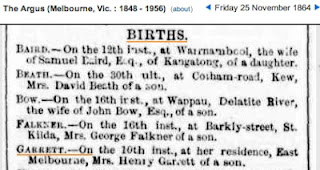 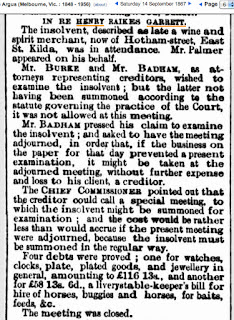 Her husband faced court (again) in 1867, this time for insolvency. The court appearance in SA was not mentioned in the newspaper transcripts, in fact Henry claimed to only have arrived in the colony in 1863 (he had arrived in SA in 1858). One of his creditors was Louisa’s brother, a solicitor with the firm Crisp and Lewis.

Louisa (and Henry) moved to Sydney the month after her father died, her arrival listed as Mrs Garrett and three children, on the Dandenong on 19 Feb 1871.
Her husband died in Woollahra, NSW just five years after the move to Sydney, leaving her with five children under 12 and pregnant with my great grandfather.

And she’d only just turned 30!

She very quickly moved back to Melbourne to be with her family, living for a while with her eldest sister, Emily Mary CHARLWOOD nee LEWIS (1838-1934).
A note on Henry’s death certificate reads “Particulars re Cause of Death (omitted to be furnished by the Informant who is absent from the Colony) have been supplied by Registrar, no certificate having been received from Dr Fortescue, before his departure for England. Signed Hy Gale 7th July 1876” 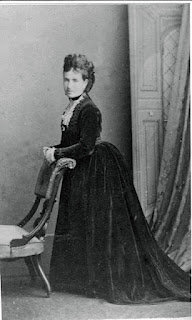 Her eldest son, Harry, died in Jan 1890. He drowned while droving in north Queensland. Two of her daughters never married. She had seven grandchildren, although the first born, a boy, died in 1905 from appendicitis aged just 11 years.

Lucky we had the date in family papers as a search in Trove would not have revealed much! 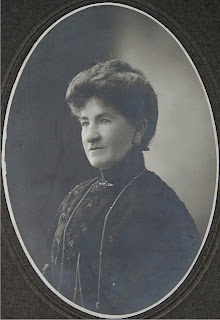