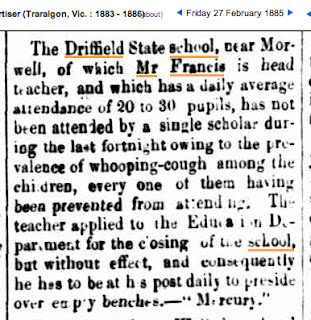 Francis is a hard surname to search for as it is also a first name – made harder by a common first name (William) that is so often abbreviated.

So I couldn’t wait to try out the tip I learnt from the Trove Masterclass at the NSW ACT Family History Conference at the weekend:
“Mr Francis”~1 AND Driffield
and
“Mr Francis”~1 AND Yinnar
~1 gives results for the search term with up to one other word in between. ~2 works the same, allowing up to two words between the words.
Driffield and Yinnar: are names of schools he taught at.

Here’s what I found: 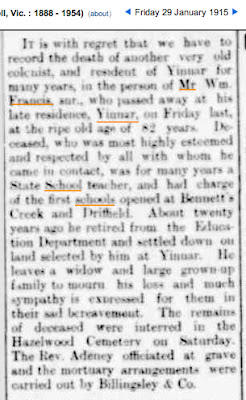 It seems that in early 1885, the whole Driffield school was sick with whooping cough and the head teacher, my great great grandfather, Mr William FRANCIS (1835-1915) was left sitting at the school presiding over empty benches.
This article in a paper with the longest name I’ve seen: Traralgon Record and Morwell, Mirboo, Toongabbie, Heyfield, Tyers and Callignee Advertiser!

Then another country obituary with great new details about his career (we hadn’t known about the Bennett’s Creek school), home (we hadn’t known he ‘selected’ his land), funeral and burial, this one from the Morwell Advertiser.

William Francis had arrived in Australia from Glamorgan Wales in 1862 with his wife and little daughter. His first posting was at Spring Hill (near Trentham) in central Victoria.
They had 11 more children, including my great grandfather William Collier FRANCIS in 1864.
He later taught at both Driffield and Yinnar South State Schools.
I looked up Bennett’s Creek and from what I can find so far it is/was near Hazelwood, so all in the same area.
He also taught somewhere around the Batesford area, near Geelong but I haven’t found the school yet – I suspect I’ll have to go to the PRO Vic to check the education records and teacher’s record books.
Posted by Jackie van Bergen at 09:11